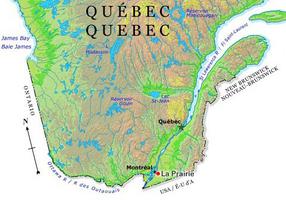 La Prairie, Qué, City, pop 21 763 (2006c), 18 896 (2001c), inc 1909. La Prairie, a suburb of Montréal, is located on the South Shore of the St Lawrence River. It took its name from the land called "La-Prairie-de-la-Madeleine," occupied by the Jesuits from 1647 and granted by the Abbé de La Ferté de La Madeleine, a member of the Compagnie des Cent-Associés. After the Conquest, British merchants immigrated to La Prairie and soon controlled its economy, which was linked to river transportation.

In 1836 the first Canadian railway, linking La Prairie with Saint-Jean, was inaugurated. After construction of the Victoria Bridge, goods trains coming from the east were diverted from the town. Around 1890 the establishment of brickyards gave the town new vigour; one of these yards is still among the largest in Canada.

In the 20th century, La Prairie's economy has undergone little growth. Other industries (electrical equipment, electronics, printing and food processing) have been established, but in the service sector, La Prairie is largely dependent upon Montréal.