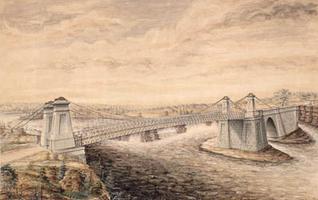 Ottawa, 1844, designed by Samuel Keefer, a daring feat of Canadian engineering for the time (courtesy Library and Archives Canada/C-005040). 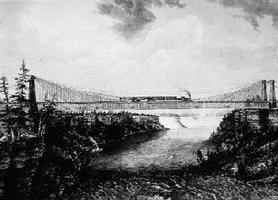 Finished in 1854, this bridge over the Niagara River in Ontario was a major engineering feat. It linked the Great Western to a great section of the United States (courtesy CN). 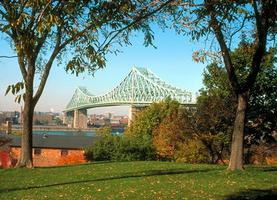 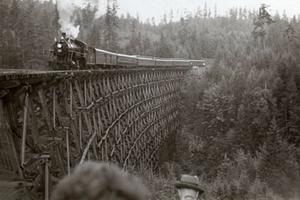 One of the most dramatic trestle bridges in the world, the Kinsol Trestle Bridge was completed by CN Railways in 1921 to connect Victoria to Nootka Sound. In recent years the structure has become so dilapidated that it can no longer be accessed, even by foot, but local groups have made many attempts to save it (photo by Elwood White). 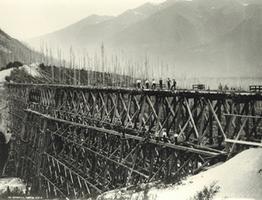 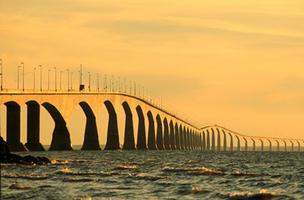 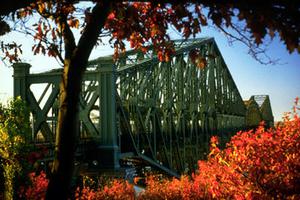 At the time of its completion, the bridge was the longest of its type in the world (photo by Michel Gagnon/CUQ Communications). 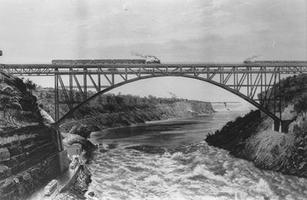 The first Rainbow Bridge over the Niagara River, below the falls, replaced an elaborate suspension bridge. It carried highway traffic and the Great Western Railway (courtesy Library and Archives Canada/C-28859). 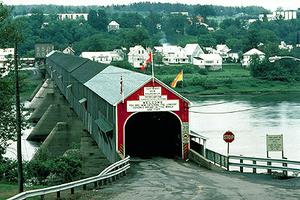 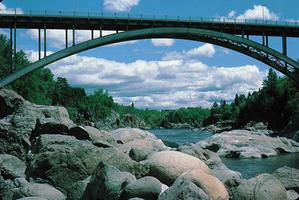 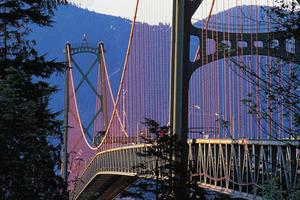 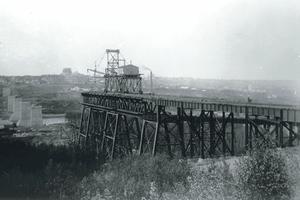 Under construction over the North Saskatchewan River (courtesy PAA).
PreviousNext

Bridges have always been important in Canadian transportation, if only because of the many waterways to be crossed by roads and railways. Logs cut from the local forests had to suffice for stream crossings on primitive trails before the advent of truss designs early in the 19th century. In winter the frozen surfaces of rivers and lakes provided safe crossings when ice had gained sufficient thickness. Ice bridges are still used; carefully designed crossings (with ice artificially built up) served, for example, on the long access road to the James Bay Project during the winter of 1971-72 prior to the erection of permanent bridges.

More remarkable was the use of an ice bridge across the St Lawrence River in the winters of 1880-81 and 1881-82, from Hochelaga to Longueuil [Montréal], to carry a standard-gauge railway; from January to March in each of those winters a small train, weighing 60 tons, safely used this unique bridge.

Covered bridges, still to be seen on secondary roads in eastern Canada, were important in early Canadian bridge building. First used in 1805 in Philadelphia, and long known as "kissing bridges" (for the most obvious of reasons), they came into wide use by the end of the century. There were then at least 1000 in Québec and more than 400 in New Brunswick. Today, there are probably not more than 200 in either province, and special efforts have been made in New Brunswick for their preservation. The covered bridge over the Saint John River at Hartland, NB, is 391 m long and renowned as "the longest covered bridge in the world."

Covered bridges were all built of timber, various types of trusses enabling steadily increasing span lengths to be used after the first US patent for trusses was taken out in 1830. Three years earlier, using a European design, John By had incorporated a 60 m span truss bridge across the Big Kettle of the Chaudière at Bytown [Ottawa] in the Union Bridge across the Ottawa River, the first link between Lower and Upper Canada, built at the start of work on the Rideau Canal.

On the associated Ottawa River Canals, engineer officers of the Royal Staff Corps had used prefabricated timber bridges even before 1827. Timber has continued in use for bridges in Canada to the present day, some of the most notable examples being the great timber trestle bridges used in early railway construction in the West, now generally replaced by steel structures.

It was a common practice to use timber for bridges in early railway building in Canada. An exception was the Intercolonial RY, completed in 1876. The chief engineer, Sir Sandford Fleming, insisted on masonry piers for all his bridges and wrought iron for his bridge spans, as in the 2 multispan bridges across the Miramichi River in New Brunswick. Steel trusses now replace the original wrought iron spans; the piers, however, are the originals from over a century ago.

Even more significant were some of the bridges erected in the 1850s for the Grand Trunk Railway from Montréal to Toronto, particularly the Victoria Bridge (1854-59) across the St Lawrence River at Montréal, even today one of the world's great bridges (2742 m long). Its original spans, and those of the bridge carrying the track over the Ottawa River at Ste-Anne-de-Bellevue, were wrought iron rectangular boxes, later replaced by steel trusses.

By the end of the century, steel was used widely. Its capability for bridges is well shown by the Interprovincial Bridge over the Ottawa River at Ottawa, the longest cantilever span in the world when built, still in active use although now for road traffic rather than rail. Downstream, the Jacques Cartier Bridge at Montréal (opened in 1929) is another fine cantilever structure.

The Quebec Bridge, farther downstream still, is Canada's most famous bridge. Designed to carry the National Transcontinental Railway across the St Lawrence, it was officially started in 1900 as the longest steel cantilever bridge of the world. It failed, with tragic loss of life, during erection in August 1907 and September 1916 (see Québec Bridge Disasters).

The finished bridge was opened on 22 August 1919. The accident was studied to good effect by an expert royal commission, and its report, a classic of structural engineering, has benefited bridge design around the world.

A suspension bridge for road traffic now parallels the Québec Bridge, one of a small number of such graceful structures found at strategic spots in Canada: across the Gate at Vancouver; the international section of the St Lawrence; and linking Halifax with Dartmouth across its harbour entrance. So successful was the latter that it has now been duplicated.

The first bridge over the Niagara R, below the falls, was an elaborate suspension bridge carrying not only highway traffic but also the Great Western Railway. It was replaced later by the first of a series of fine steel-arched bridges.

Repair of bridges without disrupting traffic has been a significant part of Canadian bridge engineering. One of the most famous examples was the reinforcing of the steel arched truss bridge over Stoney Creek on the CPR main line through the Rocky Mountains. In the 1950s, similar well-planned changes were made to some of the bridges crossing the St. Lawrence Seaway in order to give adequate clearance beneath them. Equally notable was the replacement of the fixed centre spans of 3 bridges over the Beauharnois power canal with vertical-lift bridges to permit passage of seaway traffic, this feature having been incorporated in the original designs 20 years before.

Reinforced concrete was first used in bridge construction in the early 20th century, eg, the Hurdman Bridge in Ottawa built in 1906. Today, probably the majority of small highway bridges are of reinforced concrete, an increasing number built of prefabricated units. Some quite large bridges have been constructed of this versatile material, as in the multispan, arched Broadway Bridge across the South Saskatchewan River at Saskatoon. The Broadway Bridge and the earlier University Bridge, also multispan arched, add greatly to the distinctive appearance of the central part of this prairie city. The impressive Confederation Bridge linking PEI to the mainland stretches some 13 km across Northumberland Strait. It opened in May 1997.

Some older bridges can hardly be considered beautiful, but the use of reinforced concrete has had a beneficial effect on bridge aesthetics. The elegant lines of the rigid frame bridges on major Ontario highways, for example, are believed to have influenced similar designs in the US and the UK. See also Engineering.)