Charles Byce’s mother, Louisa, was Cree from Moose Factory, Ontario. His father, Henry, was a non-Indigenous Canadian from Westmeath, Ontario. Henry Byce joined the Canadian Expeditionary Force during the First World War (1914–18) and served overseas on the Western Front, where he earned the Distinguished Conduct Medal (DCM) and the French Medaille militaire. This rare honour foreshadowed his son’s exploits two decades later. 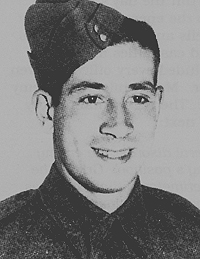 Charles Byce joined the Lake Superior Regiment (LSR), an infantry unit, in July 1940. The unit went to Camp Borden, Ontario, in October for training. After Camp Borden, the LSR served as a coastal defence unit for the port city of Saint John, New Brunswick. While stationed there, Byce met Frances DeGrasse, whom he married in October 1941.

In February 1942, the LSR was reorganized as a motor battalion and equipped with a new vehicle, the Universal carrier, a small, lightly armoured, tracked vehicle. The LSR was assigned to 4th Armoured Brigade in 4th Canadian Armoured Division as the infantry support unit for the brigade’s three armoured regiments. The unit embarked for Britain in August 1942 and undertook intensive training there. It landed on the Normandy beaches in late July 1944 and saw its first action on 5 August (see D-Day and the Battle of Normandy). The unit then moved across France and Belgium during the general Allied advance toward Germany. 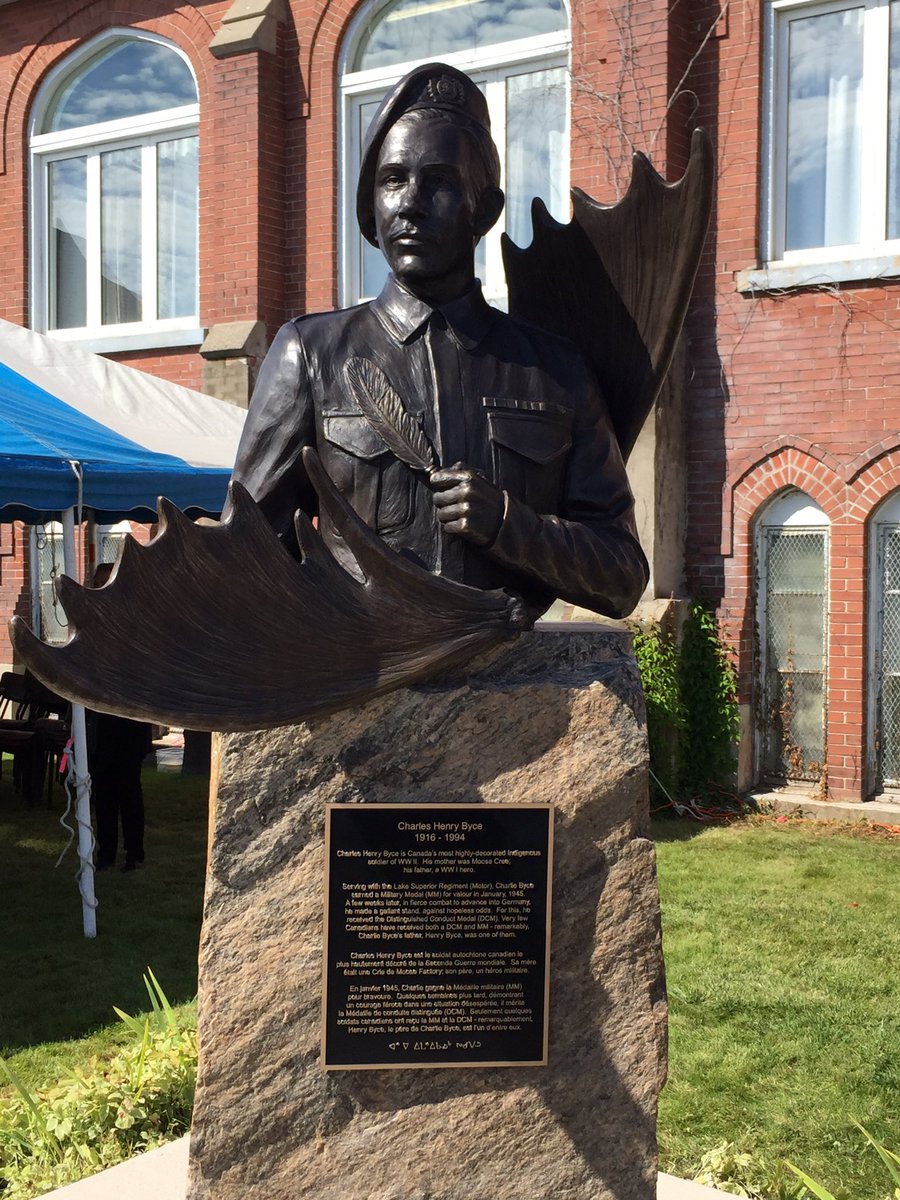 Bronze statue of Charles Henry Byce, unveiled in Chapleau, Ontario, 2016. In honour of his Cree ancestry, Byce holds an eagle feather, while moose antler's adorn the statue's base.

In early 1945, the LSR was in the Netherlands (see Second World War). Shortly after midnight on 21 January, Acting Corporal Byce and 23 soldiers launched rowboats to cross the Maas River on a fighting patrol. They were to sneak behind German lines and capture prisoners for interrogation. Charles Byce led four soldiers tasked to provide protection for the others.

After reaching the far bank, the main group came under fire several times from enemy patrols. Acting on his own initiative on both occasions, Byce moved quickly forward in the face of enemy fire and silenced the Germans with grenades, allowing the patrol to carry out its mission.

Byce was recommended for an immediate Military Medal (MM). The narrative supporting the award notes in part: “During this whole action Corporal Byce showed extreme coolness, courage and devotion to duty. Due to his magnificent efforts the patrol was able to reach its objective and withdraw safely with valuable information. This NCO’s aggressive initiative and unselfish gallantry has been an inspiration to all ranks of the unit.”

Six weeks later, the Allies came up against the Germans’ last line of defence before entering Germany (see also Battle of the Rhineland). The LSR was to attack into the heavily fortified Hochwald Gap through the Hochwald Forest. At 4:30 a.m. on 2 March 1945, Acting Sergeant Charles Byce and C Company, reduced to 44 officers and men, mounted six Kangaroos (armoured troop carriers) and moved into the Gap, supported by a troop of tanks and several self-propelled artillery guns.

C Company reached its position about 550 metres ahead of A and B Companies but lost five of its Kangaroos in the mud and darkness before arrival. Daylight soon revealed the position to the enemy and the company was bombarded with heavy artillery and mortar fire. The attached tanks were destroyed and casualties began to mount, including all officers. As German fire intensified, Byce, now in command of the remnants of C Company, fought on.

At 3:00 p.m., C Company was down to eight men and its position was untenable. When the Germans began to advance with tanks, Byce ordered his men to withdraw. He spent the rest of the afternoon behind his men, sniping at enemy soldiers to delay them before he reached the LSR companies to his rear.

After the battle, Byce was recommended for a Distinguished Conduct Medal (DCM), the highest honour next to the Victoria Cross (see Canadian Recipients of the Victoria Cross). His citation reads in part: “The magnificent courage and fighting spirit displayed by this NCO when faced with insuperable odds are beyond all praise. His gallant stand, without adequate weapons and with a bare handful of men against hopeless odds will remain, for all time, an outstanding example to all ranks of the Regiment.”

Byce received his DCM and MM from King George VI at an investiture ceremony at Buckingham Palace on 13 July 1945. Only nine Canadians of the more than one million who served in uniform during the Second World War earned both these medals.

After the European campaigns of the Second World War ended in May 1945 (see VE-Day), Charles Byce went to England in June and returned to Canada in September. He settled in Espanola, Ontario, where he worked at the pulp and paper mill. He and his wife raised seven children.

On 23 May 2008, at a private ceremony in the Canadian War Museum, members of the Byce family participated in the donation of the father’s and son’s medals. Immediately after the ceremony, both men were inducted into the Canadian Veterans Hall of Valour. On 17 September 2016, a bronze bust of Byce, mounted on a granite base, was unveiled in Chapleau. In recognition of his Cree ancestry, Byce holds an eagle feather, while moose antlers adorn the base.