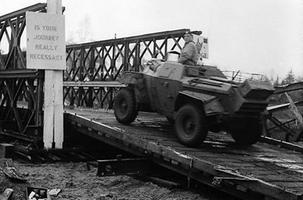 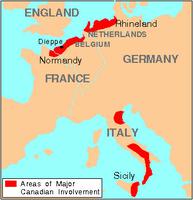 The Battle of the Rhineland 8 Feb-10 Mar 1945, was fought by the First Canadian Army (with XXX British Corps under command) and Ninth US Army while forcing back the Germans to the Rhine R. For the Canadians it involved attacking over inundated ground in the first phase (Operation Veritable, Feb 8-21) and through the Hochwald forest in the second (Operation Blockbuster, Feb 22-Mar 10) against stubborn opposition as the Germans defended German soil. Throughout the month poor weather robbed the Allies of much of their accustomed tactical air support, while mud frequently immobilized their armoured forces. Nevertheless, the W bank of the Rhine was cleared as far S as Düsseldorf in some of the bitterest fighting of the Second World War. Allied casualties totalled nearly 23 000, the Canadians losing 5300. The Germans lost approximately 90 000 men, of whom some 52 000 were taken prisoner. By 23 Mar 1945 the Allies were on the Rhine from Strasbourg, France, to Nijmegen, Netherlands.