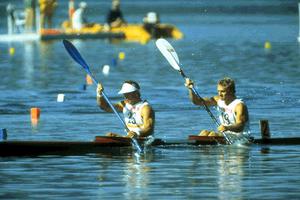 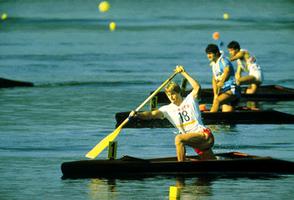 Canoeing, an aquatic activity using a small boat, sharp at both ends, paddle-propelled by one or more persons who face the direction in which the craft is heading. There are 2 types of canoe: the open, propelled by a single-blade paddle and known internationally as a "Canadian" or C-boat, and the closed (decked), with a double-blade paddle and known as a kayak or K-boat. Contemporary canoes come in a variety of shapes and materials suited to the variety of water conditions and to recreational or competitive purposes. Most popular is the open canoe, used for recreation, hunting and fishing. It is about 5 m long and constructed of wood, canvas, aluminum, fibreglass or plastic.

The best-known forms of competitive canoeing are sprint racing, held over 500, 1000 and 10 000 m, with various numbers of paddlers - the only canoe discipline in the Olympic program; "white-water" racing, with one or 2 paddlers on downriver and slalom courses; and marathon racing over lakes and rivers and across portages.

Contemporary canoeing has 2 distinct lines of development. One originated with the native peoples of Canada and continued with the early explorers, fur traders, lumbermen and settlers. Canoeing in open and decked canoes is an indigenous activity of Canadian natives and INUIT, who designed an amazing variety of water craft, each suited to local materials, the physical environment and tribal customs. Principal classes are the skin boat (KAYAK), the bark boat (particularly the BIRCHBARK CANOE) and the log dugout (some up to 15 m long).

European explorers, beginning with Jacques CARTIER, readily adopted the light and manoeuvrable birchbark canoe in place of the heavy, cumbersome rowboats from their ships. In these craft the early explorers and fur traders reached the farthest frontiers of the country. The birchbark canoe was the foundation of a supply route spanning 6500 km from Montreal to the Pacific Ocean and the Mackenzie River, and continued in use for far northern travel to the end of the 19th century. Early settlers along the water routes of central Canada used birchbark canoes for local travel, hunting and fishing. With metal tools they also constructed finely shaped dugout canoes and eventually plank canoes, still fashioned along the lines of the native craft.

The classic open Canadian canoe - 5 m long, 81 cm beam and 30 cm deep - constructed from cedar planks and elm ribs, was developed during the late 1850s along the Otonabee River near Peterborough, Ontario. The manufacture of the board-and-batten open canoe, more durable than the birchbark canoe, came in time to serve the needs of cottagers, hunters and fishermen. During the last 3 decades of the 19th century, the canoe from the Peterborough region was exported throughout the world.

The second line of development was strongly influenced by British military personnel stationed in British North America, who frequently sponsored competitive aquatic events. ROWING and sailing races were of great interest, but more spectator enthusiasm was generated by native canoe races, which were incorporated in regattas from the early 1800s. General boating clubs were started in such places as Kingston, Halifax, Montreal, Peterborough and Toronto. During the 1870s canoe races for gentlemen were added to aquatic events.

The formation and the first regatta of the American Canoe Association at Lake George, New York, in 1880 launched an upsurge in organized canoeing throughout North America. At the ACA's first meet in 1880, Canadian T.H. Wallace from Rice Lake, Ontario, won 2 races in his open Rice Lake canoe.

In response to the ACA, the Toronto Canoe Club was formed in December 1880, and thereafter canoe clubs emerged across the country. In 1887 all Canadian clubs banded together as the northern division of the ACA. A national association was founded at Brockville, Ontario, in 1900, and that August the first Canadian championships were held there. National championships have been held annually since that time, except during WWI and WWII.

In 1924 Canadian and US teams demonstrated canoe racing at the Paris OLYMPICS, and an international organization, the IRK, was founded. Since 1936, when canoeing was accepted as an Olympic sport, Canadian paddlers have fared well, especially in the Canadian canoe events. Francis AMYOT won a gold medal in the 1000 m singles in 1936, and Larry CAIN a gold and silver in the C-1 canoe at Los Angeles in 1984. In 1986 Cain went on to win golds in the 1000 m and 500 m C-1s in the Commonwealth championships. Caroline Brunet has been Canada's greatest hope for Olympic gold in recent years. In 1996 at Atlanta and again at the 2000 Sydney Olympics she won silver medals. Also successful has been Mark Oldershaw who won a bronze medal at the 2012 Summer Olympics in London in the men's 1000m.

After WWII, the infusion of Europeans to Canada helped popularize white-water canoeing. A national organization, the Canadian White Water Affiliation, was formed in 1964. In 1967 the first National Slalom and Wild Water Championships were held at the Elora Gorge in Ontario. After 1945 professional long-distance paddling was popular in western Canada, Northern Ontario and Quebec, but only in April 1980, at Ottawa, was an organization (Canadian Marathon Canoe Racing Association) established to oversee long-distance racing. The CMCRA held its first national championships in Ottawa in 1981.

The Canadian Recreational Canoeing Association was founded in May 1972, and it works to develop noncompetitive programs to improve paddling skills, instruction and safety in recreational canoeing.