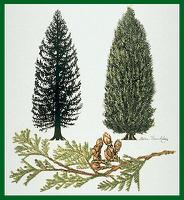 This species, much shorter than its western relative, grows to about 25 m in the Great Lakes-St Lawrence forest region. Shown with dark red male flowers (bottom left) and brownish yellow female flowers (top left) and cones (artwork by Claire Tremblay).

Cedar, in Canada, refers to evergreen conifers (genus Thuja) of the cypress family (Cupressaceae). They are also called arbor vitae [Latin, "tree of life"]. The true cedars belong to the coniferous genus Cedrus (pine family) and are found from the Mediterranean to the Himalayas. Six species of Thuja are recognized: 2 in North America; 4 in eastern Asia. Western red cedar (T. plicata), found along the BC coast and western slopes of the Rocky Mountains, may attain 60 m in height, and 3 m in diameter. Eastern white cedar (T. occidentalis), growing to 25 m, occurs in the Great Lakes-St Lawrence forest region. The Asiatic species, T. orientalis, is often planted as an ornamental. The yellow cedar on the coast of British Columbia is a species of cypress.

Cedars have small, scalelike leaves that cover flat, spray-like branches. Oval cones are 1-2 cm long. Bracts (modified leaves) and scales (ovule-bearing structures) are fused. Pollination occurs in spring; seeds (small, with 2 lateral wings) are shed in the fall. The wood is soft, light, aromatic and decay-resistant. Aboriginal people of the West Coast used cedar for totem poles, canoes and lodges. It is thought that the tea made from the leaves and bark of the Eastern white cedar was the cure for scurvy that ravaged Jacques Cartier's crew in the winter of 1535-36, (see also Uses of Plants Among Indigenous Peoples in Canada). It is for this reason Thuja species received the nickname arbor vitae.