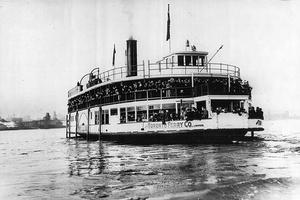 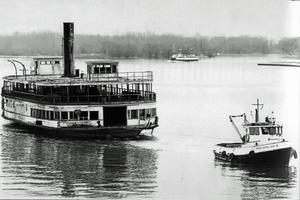 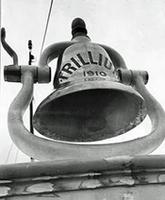 The bell atop the Trillium ferry, which began service in 1910 (public domain).
PreviousNext

On 18 June 1910, the new side-paddle steamer, Trillium, was launched at the foot of Sherbourne Street at the Polson Iron Works. Present at that launch was Phyllis Polson, who would be at the ceremony to re-launch the famous ferry six decades later. Hundreds of thousands of people rode the Trillium in its 46 years, many on their way to Hanlan's Point to watch the Toronto Maple Leafs baseball team. In 1919 the Trillium was chartered to carry the Prince of Wales to Toronto Island.

As traffic to the island began to dwindle, Trillium was sold to the Metro Toronto Works Department in 1957 for ignominious duty as a garbage scow. It lay abandoned and rotting in an island lagoon for 16 years. In 1973, local historian Mike Filey and Alderman Art Eggleton initiated a study that resulted in Metropolitan Toronto Council raising $950,000 to restore her.

Trillium was towed to Port Colborne where naval architect David Munro faced the challenge of restoring the vessel while having it meet modern safety standards. The wooden superstructure had to be replaced to meet fire requirements and the original coal fired Scotch boiler was replaced, while the magnificent propulsion engine was restored to its original condition.

Most fortunate was the anonymous return of the original builder's plate and the original whistle. Much of Trillium's original appearance was recaptured by attention to reproducing in accurate detail original wooden facings at the stairways, pillars, doorways and similar areas.

Trillium returned to service on 18 June 1976, powered by her original steam engine. The ferry remains in charter service today. She is the last steam-operated side-paddle wheeler in operation on the Great Lakes.