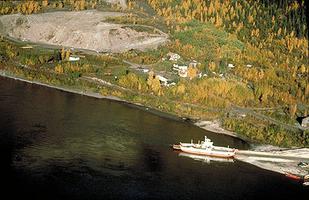 The hydrofoil was the creation of Alexander Graham Bell, his wife Mabel Bell and the engineer F.W. Casey Baldwin. On September 9, 1919, on the tranquil waters of the Bras d'Or, the hydrofoil raced across the surface of the lake faster than any person had ever travelled on water. At a time when the greatest steamships of the world made less than 60km/h, the HD-4 hydrofoil vessel was clocked at 114km/h. 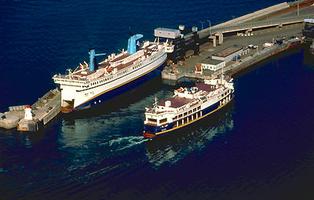 Tidal marsh and rail ferry, chemicals travel to Vancouver Island by the main arm of the Fraser River (photo by Thomas Kitchin).
PreviousNext

Ferries are vessels that carry passengers and vehicles across a body of water such as a lake, river or harbour, on a regular schedule. Simple ferries have operated across rivers and lakes for centuries. The earliest ferries were skiffs or rafts, rowed by oars, or towed by men or horses using ropes. The modern car ferry employs the roll-on, roll-off (RO-RO) method of loading and unloading vehicles through bow and stern doors.

Although the Scandinavians claim to have pioneered the RO-RO concept, the first purpose-built RO-RO ferry was the Motor Princess, launched at Esquimalt, BC, in 1923 for Canadian Pacific. It ended its long career with British Columbia Ferry Corporation in the 1970s as the Pender Queen.

The distinction between ferries and other vessels has become less clear during the past decade. The RO-RO method is used in many oceangoing cargo vessels, while ferries are being built larger and used on longer routes, necessitating the provision of staterooms and other passenger facilities similar to those provided on cruise ships and passenger liners.

In addition to car, truck and train ferries, there are also passenger-only ferries that generally operate over very short distances, such as across harbours (eg, Vancouver and Halifax). New marine technologies have increased the speed and efficiency of ferries. The Abegweit, a CN Marine ferry, has icebreaking capacity and is fitted with an air-bubbler system that eases the vessel through the ice by lubricating the sides with air. Hydrofoils, hovercraft and catamarans are all surface-effect ships that attempt to maximize speed by reducing the friction between water and hull. Hovercraft can attain speeds of 60 knots; hydrofoils and catamarans can attain 45 knots; whereas large, conventional car ferries generally operate at less than 22 knots.

The tremendous increase in the size of modern ferries has led to some safety concerns. The operational efficiency of ferries is largely the result of the vast, easily accessible car decks, but their very nature makes these car decks a potential danger. Should the deck become only slightly flooded, the vessel could become unstable very quickly owing to the tremendous weight of the water and its propensity to shift quickly on the wide-open deck.

Although a flooded car deck is a rare event, this phenomenon has resulted in some quick capsizings in recent years, the most notable of which was the Herald of Free Enterprise disaster in 1987. Having failed to close its watertight doors, the vessel capsized in less than 2 minutes after taking water on its car deck just off Zeebrugge, Belgium. The loss of 188 lives has prompted regulatory authorities worldwide to re-evaluate safety measures for modern ferries.

Operators of large ferries around the world include Sealink (operating between Britain, Ireland and Europe), Danish State Rail, Hong Kong and Yaumati Ferry Co, Washington State Ferries and the British Columbia Ferry Corporation. The largest ferries carry more than 2000 passengers and up to 700 vehicles on 3 car decks. To berth these large, new ferries most major ferry terminals are now equipped with ramps that enable vehicles to be loaded and unloaded from 2 decks simultaneously.

The BC Ferry Corporation operates some of the busiest terminals in the world. It also has the 4 largest double-ended ferries in the world. The Queen of Cowichan, Queen of Coquitlam, Queen of Surrey and Queen of Oak Bay carry 1500 passengers, plus 360 cars on 3 decks, and travel at up to 22 knots. The term double-ended refers to the propellers at each end, which alleviate the necessity of turning the ferry around and backing into a dock.

Because of the variety of services provided in Atlantic Canada, the CN Marine fleet includes vessels ranging from 30 m high-speed craft to a 148 m ship capable of carrying 39 railway freight cars; from vessels that take a dozen passengers with a load of cargo to others capable of carrying 1100 people and their automobiles, trucks and tractor trailers. Some vessels operate between 15 main terminals and others between 100 Newfoundland and Labrador outports, many of which have no other transportation link with the outside world.

In Canada there are also dozens of small ferries operating across rivers and lakes, eg, those plying Toronto Harbour to Centre Island, or the service on Georgian Bay from Tobermory to Manitoulin Island. Over the past 20 or 30 years, many of these small ferries have been replaced by bridges. The major ferry systems in the country, however, are saltwater operations. CN Marine, owned by the federal government, operates 18 ships on routes between Newfoundland, PEI, NS, NB and Maine.

The Société des traversiers du Québec, owned by the province of Québec, operates 9 vessels on 6 routes across the St Lawrence River. The BC Ferry Corporation, owned by the province of BC, operates 38 vessels on 25 routes along the BC coast. The BC Ferry Corporation is a provincial crown corporation that receives a small federal subsidy (because one of its routes is an extension of the Trans-Canada Highway to Vancouver Island), but the bulk of its subsidization comes from the provincial government.

In Québec, the government ferries are a separate organization subsidized by the provincial government. CN Marine receives its entire subsidy from the federal government because it provides a transport link between provinces. 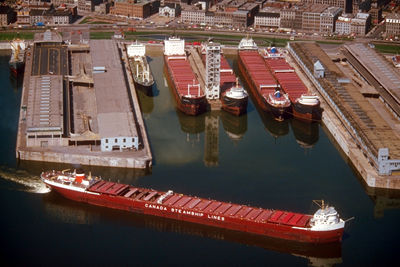