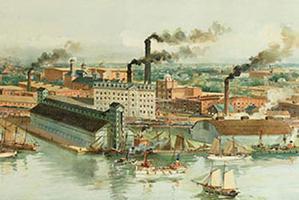 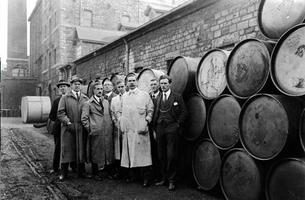 Staff outside Gooderham and Worts Distillery, circa 1916 (courtesy City of Toronto Archives/Fonds 1583, Item 10). 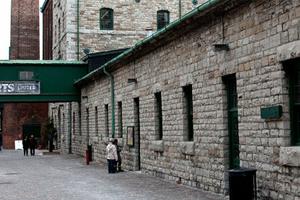 "Preserving Our Industrial Past"

In 1832, brothers-in-law James Worts and William Gooderham built a windmill on the shore of Lake Ontario. After Worts's death, Gooderham added a distillery and launched a business that would become the largest distillery in the British Empire, and for a time, in the world. That windmill has disappeared, but more than 40 late-19th-century buildings remain. They are a testament to the creative integration of the past with completely different, modern uses.

The Gooderham family's expertise making beer and whiskey made them the wealthiest family in Ontario. The five-storey, limestone mill and distillery, designed by David Roberts Sr, opened in early 1861, increasing production capacity from 80 000 to two million gallons per year (303 000 litres to 7.6 megalitres). Roberts and his son would go on to design nearly all of the distillery buildings, one of the major reasons for the harmony of the site, as well as the distinctive Gooderham flatiron building and the family mansion.

Whiskey distilling was interrupted during the First World War for the production of acetone, and the business was sold to Hiram Walker in 1926. The distillery was closed permanently in 1990. The future of the heritage buildings remained in doubt until December 2001, when Cityscape purchased them and created the picturesque, car-free neighborhood known as the Disillery Historic District. Its galleries, artists' studios, design shops, coffeehouses, restaurants, and numerous live music performances, exhibitions and special events now attract tens of thousands of people each month. The area has also been used for more than 800 film and television productions. 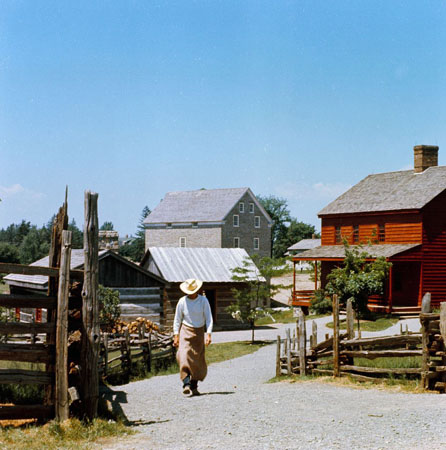