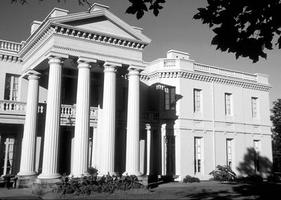 A forceful though enigmatic personality, MacNab had a deep influence on many aspects of pre-Confederation Canada, including its railways (courtesy Library and Archives Canada/C-3615).
PreviousNext

Sir Allan Napier MacNab, soldier, lawyer, businessman, politician (b at Newark, UC 19 Feb 1798; d at Hamilton, Canada W 8 Aug 1862). A forceful though enigmatic personality, MacNab had a deep influence on many aspects of pre-Confederation Canada. As a youth he served with conspicuous gallantry in the WAR OF 1812. Moving in 1826 from York [Toronto] to Hamilton, he set up a thriving law practice, but he owed his fortune to speculation in real estate. He was an entrepreneur as well; with Glasgow merchant Peter Buchanan, he was chiefly responsible for the construction of the GREAT WESTERN RY.

In the first phase of his political career (1830-35), MacNab vigorously promoted economic development and moderate Tory policies. In the second (1836-49) he became an extreme Tory. Knighted for his zeal in suppressing the REBELLION OF 1837-38, he vainly stressed loyalty as an issue in public policy. In the third (1850-56) he declared that "all my politics are Railroad," but as leader of the Conservatives he was also concerned to move his party back from extremism. In 1854 he played an important role in the formation of the Liberal-Conservative alliance and became premier of the Canadas (1854-56). Dundurn, his stately 37-room mansion, still stands today in Hamilton.