After the War of 1812, there was growing discontent in Upper Canada with the elite clique of politicians and officials known as the Family Compact. The Compact dominated the running of the government. They controlled the system of patronage throughout the colony and used political office and influence to further their own business interests.

There was also popular opposition to land-granting practices. These policies favoured recent emigrants from Britain and the Church of England and its supporters over other  Protestant groups. The disapproval of this was strongest among the so-called late Loyalists and their descendants. (Late Loyalists were American-born settlers who had migrated to Upper Canada prior to the War of 1812. Many were non-conformist in their religious views and somewhat republican in their political leanings.) In the 1820s, settlers of American origin were also denied political rights, including the choice to swear allegiance to the Crown. This made them ineligible for land grants.

Amid these tensions, there was also economic depression in the 1830s. It was felt hardest by the colony's farmers. They suffered a series of crop failures and were subject to harsh debt-collection laws. These grievances breathed life into the nascent  Reform movement. Its members won control of the elected Legislative Assembly in 1828 and again in 1834. 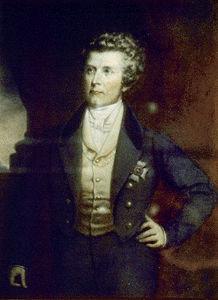 Sir Francis Bond Head, the new lieutenant-governor, was sent to Upper Canada to appease the reformers in the Assembly. However, he succeeded in helping to cause the rebellion. He openly assisted the conservatives in winning the election of 1836. Reformist leaders such as Marshall Spring Bidwell, who had been Speaker of the Assembly, and moderate reformers such as Robert Baldwin, were defeated. The more extreme elements in the Reform movement then began to mobilize under the leadership of William Lyon Mackenzie.

Mackenzie was a Scottish-born politician and newspaper publisher. In 1834, he became the first mayor of Toronto. He was a fierce critic of the Family Compact and the government's refusal to give political rights to American settlers. As a member of the Legislative Assembly, he first sought to pressure the government by organizing a network of political unions and a boycott of imported goods. He also entered into a working relationship with reformers in Lower Canada.

In 1837, however, Mackenzie was emboldened by the insurgency in Lower Canada and the transfer of all British troops there from Upper Canada. He persuaded his more radical followers to draft a republican constitution for Upper Canada modelled on that of the United States. He also urged them to seize control of the government.

Between 5 and 8 December 1837, approximately 1,000 men gathered at Montgomery's Tavern in Toronto. Largely from the countryside north of Toronto, they represented a cross section of the farming community from which Mackenzie had always drawn most of his support. A large number of the settlers were of American origin.

On 5 December, a motley assortment of 500 to 700 rebels bearing only hunting rifles, staves and pitchforks, marched south on Yonge Street. Their objective was to engage a smaller force of armed government loyalists and militia. On their way, the rebels ran into a picket of about 20 loyalists who opened fire. The front rank of the rebel force returned fire and then dropped to the ground, to assume a safer firing position. However, the remaining rebels thought their comrades at the front had been killed. In their fear and confusion, they turned and ran. In total, three men — two rebels and one loyalist — lost their lives.

On 8 December, a force of about 1,000 volunteers loyal to the government dispersed the remaining rebels at Montgomery’s Tavern. The loyalist forces included 120 Black soldiers under the command of Colonel Samuel Jarvis. (Hundreds of Black Canadians volunteered for service during the rebellions. They formed several fighting units — known as “Coloured Corps” — in Chatham, Toronto,  Hamilton, Sandwich (Windsor) and along the border in the Niagara region.)

A second confrontation took place a few days later near Brantford. Five hundred men gathered under the leadership of Charles Duncombe. They were easily dispersed by government volunteers under the command of Sir Allan Napier MacNab.

Josiah Henson and his wife Nancy circa 1875. A former slave from the US, Henson helped to establish the British-American Institute, a vocational school and refuge for fugitive slaves.

Mackenzie, Duncombe and other rebel leaders fled with about 200 followers to the United States. With the help of American volunteers, the various rebel groups launched raids against Upper Canada. This kept the border in a state of turmoil for nearly a year.

On 8 January 1838, the Upper Canadian militia and a 50-man Coloured Corps under the command of Black community leader Josiah Henson captured the sailboat Anne. It had ferried rebel troops between Detroit and Windsor. It also carried significant amounts of cash and munitions. The rebels’ loss of the Anne ended their incursions in the southwest.

With the support of Americans who wished to liberate Canada from British rule, Mackenzie took control of Navy Island in the Niagara River, just upriver from the falls. He proclaimed a republic of Upper Canada. He was forced to withdraw on 14 January, after Canadian volunteers burned the rebel ship, Caroline. It had been supplying Mackenzie’s forces and was set adrift over the falls.

During 1838, the rebels continued to send expeditions across the border. They mounted major raids at Pelee Island in Lake Erie in February, at Short Hills in June, at  Prescott in November and at Windsor in early December. (See also: Battle of Windmill.) Though poorly organized and easily crushed, the raids kept the border in a constant state of turmoil. In fact, they brought Britain and the US to the verge of war. (See: The Early American Republic and the 1837–38 Canadian Rebellions.) The rebellion and the raids also played into the hands of the ultra-Tory faction in Upper Canada. It received a temporary surge in popularity as a result.

Only two of the original rebels, Samuel Lount and Peter Matthews, were executed by the government. However, many reformers, including Bidwell, fled to the US. The ensuing conflicts along the border led to many more executions, deaths and deportations than the original uprising. 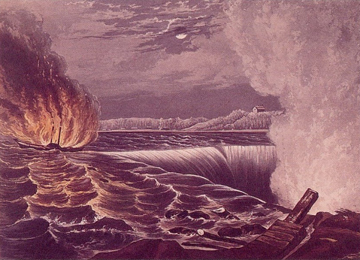 The Caroline descending Niagara Falls after being set on fire by militiamen, 29 December 1837.

There is continuing debate about who was responsible for the rebellion and the degree of popular support it enjoyed. Some historians sympathize with the rebels and believe they represented the voice of the majority, or at least of the colonial working classes. However, the mainstream historical view is that the uprising had limited support and was largely an accident. This view holds that the rebellion was caused by the inexcusable partisanship of lieutenant-governor  Sir Francis Bond Head and the rash behaviour of William Lyon Mackenzie.

Few historians see any necessary political connection with the rebellion in Lower Canada. Without it, however, the Upper Canadian revolt probably would not have happened. The impact of the Upper Canadian insurgency is equally debatable. It undermined the influence of the extremists in Upper Canada. It also allowed less radical leaders, such as Robert Baldwin, to reshape the reform movement along more moderate lines.

The rebellions in both Upper and Lower Canada led directly to the appointment of Lord Durham and the Durham Report. It recommended that the Canadas be united into one colony. The Act of Union was passed in 1840. The united Province of Canada came into being in 1841. This led to the introduction of what became known as responsible government.

Historians of past generations insisted that without the rebellions, change would have come more slowly, if at all. The more recent trend is to dismiss the rebellions as unnecessary. This is particularly true for the rebellion in Upper Canada. Britain was already moving towards gradual change through its appointment of more reform-minded governors: Sir James Kempt (1828–30), Lord Aylmer (1830–35) and  Lord Gosford (1835–38). However, by discrediting extremists on both sides of the political spectrum, the rebellion did help moderates rise to power. They focused on the campaign for responsible government and were thus prepared to unite the two Canadas.