Any act of migration is an adventure and the adventuring spirit has at times characterized even the North American migrant. The interpenetration of the Canadian and American peoples has been such that no Canadian can have escaped its influence.

Any act of migration is an adventure and the adventuring spirit has at times characterized even the North American migrant. The interpenetration of the Canadian and American peoples has been such that no Canadian can have escaped its influence.

The minister of Trade and Commerce speaking at the official opening of the Bethlehem Steel Corporation loading facilities at Picton, Ontario, 1955 (courtesy Library and Archives Canada/C-472). 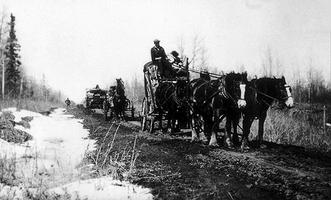 Many Americans came north to Alberta in the early 20th century when the free land in the US had been taken (courtesy PAA).
PreviousNext

Migration between the American-Canadian border has usually been treated as a natural event - diffusion through a semipermeable border - and the similarities of the 2 nations are seen as contributing to the easy interchange. For most of North American history there is some truth to these conceptions, although such matters can easily be overemphasized. Moreover, regulations on both sides of the border have made migration much less flexible over the last 25 years.

Any act of migration is an adventure and the adventuring spirit has at times characterized even the North American migrant. The interpenetration of the Canadian and American peoples has been such that no Canadian can have escaped its influence. That only 1.3% of the total Canadian population in 1951 (the most recent figure available) was American-born is deceptive. Because of prior official Canadian reluctance to recognize Americans as representing a distinct ethnic origin, Americans were not identified in the Canadian census. Not until 1991 could those of American origin choose to so label themselves, and even then they had to write in the designation.

Identifying Americans in the census material was extremely difficult, for too much of the statistical data relied on older listings of the "American-born," obviously a limiting approach. Despite the statistical difficulties, the American is one of the oldest and - for all its fluctuations - one of the most enduring stocks in Canada. Perhaps 3 million Americans have immigrated to Canada over the years, beginning with the Yankee Planters to Nova Scotia of the mid-18th century and continuing through the Loyalists of the late 18th century. Two million Americans (about 20% of all immigrants) arrived in Canada in the 20th century. Thus, however unheralded, the United States has always been one of the 3 or 4 most important nations of origin for Canadian immigrants.

Proximity has made migration and remigration relatively easy, but the transience of the American immigrant can easily be overstated. Between WWI and the 1970s US citizens were somewhat less likely than other foreign nationals to become Canadian citizens. But between 1902 and 1914, for example, over 74 000 American citizens were naturalized, over one-third of the total number of Canadians naturalized over these years. One-tenth of all American immigrants over the entire 20th century have become Canadian citizens, making up 7% of all aliens who did so. Although many Americans have come and gone home, many others have remained in Canada to make their lives.

American immigration has been mainly of individuals seeking land or alternative resources or better opportunities, although there has always been a minority seeking political or religious refuge. Refugee Americans include the Loyalists, fugitive Blacks, war resisters and draft dodgers, and a few religious groups such as Quakers, Mennonites and Hutterites, whose migration has been associated with their Pacifism. Mormons have arrived in search of greater tolerance for their beliefs.

Americans have emigrated from all regions of the US (but particularly from the border states) and from all ethnic groups (but especially British and northern European). Canada has traditionally welcomed Americans who emigrate with property and technical skills, a welcome reflected in Immigration Policy. However, not all Americans have been considered ideal immigrants. Since the late 1800s, immigration policy has managed to exclude most blacks, alleged subversives and the urban poor. Moreover, American immigrants have often been criticized for their lack of "commitment" to Canada.

The most extensive single wave of Americans came to Canada between 1895 and 1915, after the railways were well established in the West and good, inexpensive land had diminished in the US. American farmers poured into Canada, making up nearly as many western settlers as those from the British Isles, who were less likely to farm. Some of the effects of this migration are still to be seen in the relatively high US-born presence in Alberta and Saskatchewan, in the proportion of farmers among the US-born, and more arguably, in political attitudes in these provinces quite different from the remainder of Canada.

Americans always sought and found land in Canada, bringing their experience to bear upon land that was only dimly sensed to be foreign. As the political distinction of British North America/Canada grew and became increasingly British in emphasis, an earlier American influence in education, religion and culture declined. The War of 1812 was one watershed. The subsequent wave of British immigration 1815-1850 was another. Skilled workers and entrepreneurs nonetheless trickled in throughout the 19th century, especially into Ontario, playing important roles in certain industries, such as the manufacture of iron goods or the processing of timber products.

American settlers have been involved in many of the significantly Canadian enterprises - the Fur Trade, Exploration, resource discovery and exploitation, early industrialization (on both the business and the labour side), railway and bridge engineering and construction, and modern scientific research. Proximity, again, has helped alert immigrants to opportunity and they have come with the advantages of a comparatively complex and advanced technology. There have been certain areas in which American immigrant participation has been minimal, however, such as Canadian banking and the law. American settlers were notable among the leaders of western agrarian protest (see Populism), and in the western labour union movement, especially the Wobblies (Industrial Workers of the World) and the Socialists in the mining communities, although Britain has probably overall been a more important source of urban social and economic radicalism.

Until recently, American settlers scattered more widely in Canada than other immigrants: traditionally they were concentrated in border areas such as the Niagara Peninsula, and were less likely than other foreign-born to congregate in cities. The 2006 census reported 316 350 people of American origin (single and multiple response) in Canada.

The natural amenities of a locale and region, such as those found on either coast, have been increasingly attractive. By 1951, when the US-born were 8% of all foreign-born in Canada, they were 10% of foreign-born in BC and 31% in the Atlantic Provinces. In 2006 only 4% of Canadian-Americans lived in the Atlantic Provinces, approximately 12% of people in Québec reported American ancestry, one-third resided in Ontario (36%) and about half lived in the Prairie Provinces and BC (48%).

American immigrants in this century are wealthier than the immigrant norm. Between 1964 and 1972 they brought into Canada 3 times the capital brought by the average immigrant per head. While in Canada, Americans tend to greater wealth than the foreign-born norm - for example, they represented 43% of all foreign-born with land holdings greater than 951 acres, and in 1970 the American-born had a higher representation in the top salary range than any other natal group.

Americans have traditionally included a disproportionately sized managerial and proprietary cadre who have tended to concentrate in industries and in geographic areas where US investment is highest (see Foreign Investment). Resource exploitation, such as in oil and gas exploration and extraction in Alberta, has attracted the greatest US investment and apparently the most immigrants of the managerial class. The emphasis began to shift in the 1960s to other areas such as computers. Characterizations of American immigrants as transient managers and technicians changed dramatically in the mid-1960s with a remarkable influx of professionals, especially university teachers and artists, who frequently reported alienation from American life aggravated by the Vietnam War).

American entrepreneurs have been prominent in manufacturing in both centuries, but especially in those closely linked to resource exploitation, such as pulp and paper or the development of hydroelectric power. These resources have often been exploited by American-owned firms to satisfy an essentially American market, as in the manufacture of newsprint, where the per capita consumption in the US soared from 8 lb in 1890 to 62 lb in 1929. American "branch plants" - owned and controlled from head offices in the US - became conspicuous in the 1890s and continue to thrive, although they are now likely to have Canadian managers. Many of the American-born managers of branch plants, as well as former American managers of independent Canadian firms, have put in much more than a "tour of garrison duty," founding establishments of note and even towns (such as Walkerville, Ont, and Hull, Qué), and contributing generally to Canadian society.

The influence of the American-born in Canada upon Canadian culture has been difficult to measure because Canadian culture has been so generally affected by American culture, popular and otherwise. Many of the American war resisters who came to Canada in the late 1960s were struck by the absence of a distinctive Canadian culture; ironically enough, their calls for Canadian cultural independence were often disparaged by Canadians for being "American-inspired." The American-born and American-descended in Canada have never organized as a self-conscious ethnic group, chiefly because Americans have never felt terribly "foreign" in Canada and can usually find their American identifications so easily. At the same time, the sense of a vague hostility to Americans within Canadian society has also helped reduce overt displays of American consciousness.

The best known and most respected names of individual American immigrant/settlers since Canadian Confederation are probably those of William Van Horne, Henry Wise Wood, C.D. Howe and Wilder Penfield. The legacies of each are conspicuous in Canada, in the Canadian Pacific Railway, in agrarian populism, in aspects of modern liberalism at the federal level and in the mapping of the human brain. Conspicuous too was their identification with Canada, although the absence of this quality in the American immigrant in general has probably been overemphasized. "Building that railroad," Van Horne said, "would have made a Canadian out of the German Emperor."