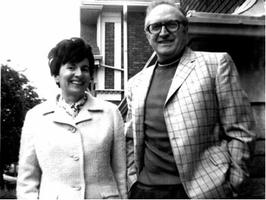 Louis Siminovitch, molecular biologist (b at Montréal 15 May 1920). He received his undergraduate and graduate education in chemistry from McGill and he trained at the Institut Pasteur, where he shared in the discovery of bacteriophage lysogeny.

In his unofficial capacity as Canada's chief biologist, he has served nationally and provincially on various bodies, as editor of the scientific journals Virology and Molecular and Cellular Biology, and was a founding member of the now-defunct Canadian science journal Science Forum. He has had a major influence on the careers of numerous Canadian molecular biologists. His research has centered on somatic cell genetics as a founder of the field, and on the Molecular Biology of mammalian cells.

Some 170 publications in books and leading scientific journals have come from his work. Among numerous awards are the Centennial Medal, Gairdner Foundation International Award, Flavelle Gold Medal and membership in the Royal Society (London).