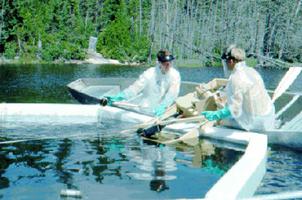 Biology [Gk bios "life," logos "discourse" or "reasoning"] is the science of life, embracing all studies of living organisms and, as such, is inherently interdisciplinary. Attempts by some specialists to use the term in a narrow sense are shortsighted and damaging.

Biological studies of individuals and groups of organisms can occur at various levels (eg, molecular, cellular, anatomical, functional, behavioural, ecological and evolutionary). Great strides, notably in BIOCHEMISTRY and electron microscopy, have strongly influenced classification at all taxonomic levels in the last 40 years.

Many organisms placed together on the basis of form and structure (gross morphology) are now seen to be unrelated, and it is clear that living beings are better classified as monera, protista, FUNGI, PLANTS or ANIMALS, rather than simply as plants or animals, the classical division. The 5 kingdoms are placed in 2 "super kingdoms": Prokaryota (cells having no membrane-bound nuclei), and Eukaryota (cells having true membrane-bound nuclei). Other distinctions correlate with nuclear structure to make the separation conspicuous and absolute.

Prokaryota include only the kingdom Monera, made up of groups of bacteria (including the so-called BLUE-GREEN ALGAE, better termed cyanobacteria). The lower boundary of Monera is ill-defined because the viruses, which are not cellular in structure, may or may not be included. Some viruses are so simple that they are little more than self-replicating molecules, and cannot yet convincingly be defined as "living."

The simplest eukaryotic kingdom is Protista, primarily one-celled organisms with organized nuclei and other organelles which function in photosynthesis, cellular respiration, metabolism, etc. The kingdom is somewhat miscellaneous; however, protists nearly always reproduce by some form of mitotic nuclear division (ie, the nucleus divides to form 2 new nuclei, each having the same number of chromosomes as the parent nucleus). The cells are usually considerably larger than those of prokaryotes.

Protista evolved from Monera by processes not wholly understood. Current theory states that the specialized cell parts (organelles) evolved from separate entities which lived inside the one-celled body of the moneran, in symbiosis with it. This theory of "symbiotic origins" is convincing for chloroplasts (photosynthetic organelles): those of red algae deriving from cyanobacteria; those of green algae from a green prokaryote like the Prochloron; and those of other algal groups from extinct or undiscovered photosynthetic prokaryotes.

Although less convincing for other organelles, the theory is more plausible than some proposed alternatives. The protistan level may have been reached more than once from different Monera. Protista is not a convincingly "natural" kingdom but, rather, a convenient repository for organisms at similar evolutionary levels.

The 3 "higher" kingdoms (Animals, Plants, Fungi) arose from different groups of protistans. Defining the boundaries between Protista and the "higher" kingdoms is a major problem. For example, although slime molds (Myxomycetes) seem closer to protozoa than to true fungi, they shed dry spores, form fruiting bodies and have been studied mainly by fungal specialists (mycologists), so that most collections are in mycological HERBARIA.

A more contentious case involves the Chytridiomycota (microscopic, aquatic organisms), included in Protista by some theorists, but grading imperceptibly into typical fungi and studied exclusively by mycologists. Such problems demonstrate that classifications are man-made rather than completely natural. Except at their lower limits the 3 higher kingdoms are clearly distinct.

The terms taxonomy and systematics have become nearly synonymous through careless use. "Taxonomy," coined in 1813, covers the bases, principles and rules of classification and nomenclature (naming), including the hierarchic framework, and refers not to a research discipline but to a supporting methodology.

Modern "systematics" (the actual arranging, grouping and naming of organisms) began with the work of 18th-century Swedish botanist Carl von Linné (Linnaeus), who developed "binomial" nomenclature (with separate names for genus and species), which both assigns to each organism a unique scientific name (in Latin form) and indicates relationships among organisms.

Advances in systematization were slow until the re-emergence of GENETICS and the growth of cytology (study of cell contents). Botanists especially made increasing use of cytogenetic data in their groupings. Through Julian Huxley and others, the "new systematics" sprang into prominence about 1940, and was soon rechristened "bio-systematics," defined as the scientific study of kinds and diversity of organisms and of any and all relationships between them. The general approach to systematics for most kinds of organisms uses all appropriate disciplines, although choice varies with organisms involved, eg, cytogenetics, which studies chromosome sets within cells, cannot be used routinely with many fungi whose chromosomes are scarcely detectable.

Although attempts have been made to restrict it, biosystematics is well established as using any discipline that may complement morphology and anatomy, eg, cytology, genetics, biochemistry, ecology, BIOGEOGRAPHY, reproductive biology, host-parasite relationships, ethology (animal behaviour) and, with the advent of computers, mathematical analysis of data. A student taking a higher degree in plant systematics must now complement morphology with one or more subsidiary approaches, and advanced students must usually be familiar with methods of statistical analysis and computer programming. Biosystematics is thus the focal point of all biology, linking all disciplines and demonstrating EVOLUTION in action, although the complexity of biology makes its complete unification very difficult, if not impossible.

Biological exploration began early in Canada, but collectors returned their specimens to Europe for study. Inevitably, systematics had a late start in Canada, but early in this century the pace increased. The rise of biosystematics found systematists in Canadian universities and research institutions ready to embrace the broadened discipline. Canadian contributions have been perhaps most conspicuous in studies of some groups of flowering plants, insects and fungi.

Some disciplines (eg, ecology, genetics and microbiology) may be variously divided, and others tend to overlap (eg, biogeography with ecology). Many disciplines are applicable to organisms in more than one kingdom. The number of potential fields of study is thus enormous. Evolution, included in the above list because courses are taught under this title, is not a discipline but, rather, a theory which informs all biological disciplines.

Almost all organisms are influenced by several fluctuating physical factors, notably light, temperature, humidity, precipitation, wind, soil texture and nutrients, erosion and fire. The total ecology of an organism potentially involves these factors as well as interplay with all other organisms in the community. As a result, most biological problems involve more variables than are usually dealt with in a problem in the physical sciences. All atoms of a chemical element are identical, but all individuals of sexually reproducing organisms are different. Very often only a partial solution of a biological problem is possible; but a biologist alert to the factors involved can usually interpret the phenomena under study.

The rapid growth and increasing complexity of biology favour narrow specialization even among beginning students; but, since many problems require contributions from several biological disciplines and from the physical sciences, some compromise must be made. In advanced studies, the team approach is popular. Several examples of Canadian contributions to multidisciplinary successes are described below.

With the help of a mathematician, a botanist-mycologist having some knowledge of aerodynamics and meteorology gained an understanding of the "splash cup" mechanism found in various plants, which uses falling water to disperse seeds or spores. They found, surprisingly, that a 4-4.5 mm drop, such as falls from foliage, has greater momentum after less than l m of fall than a typical 2 mm raindrop at terminal velocity. It was then clear why golden saxifrage (Chrysosplenium) flourishes in arctic marshes where fog and drizzle cause drops to fall scarcely 0.5 m from nodding grasses and sedges, and why bird's nest fungi grow beneath the dwarf shrubs of the Peruvian desert where fog is the only precipitation.

Elementary aerodynamics enabled an amateur ornithologist to show that the extinct Jurassic bird, Archaeopteryx, was not a powered flier, but surely a good glider. Its wing form and function were shown to be similar to those of most modern passerines. Paleontologists had tried to explain the wings, which had no anchorage for powerful pectoral muscles, as paddles to beat down insects, and the feathers as a shawl to keep the bird warm.

Study of various parasites throws light on plant relationships, and requires combining studies in plant systematics with mycology, entomology or nematology. Rust fungi and their host plants reflect one another's ages of origin because compatible gene complements are most likely to occur in hosts and parasites in the evolutionary youth of each group. This explanation was developed through years of combined studies on the ecology and biogeography of hosts and parasites and finally yielded increased understanding of the relationships and relative ages of many plant groups.

The collared LEMMING usually has a fairly regular 4-year population cycle but, in parts of the High Arctic, the population fluctuates irregularly. Wildlife zoologists, combining microclimatological and ecological studies, found that scanty and irregular snow cover in these regions may keep burrow temperatures so low that the lemmings do not achieve breeding condition.

Arctic botanical studies, which started in early spring when sea ice was still intact and wind-packed snow was smooth and very hard and which applied elementary aerodynamic principles, showed that seeds of most arctic plants are easily blown long distances during most of the year even if they lack wings or plumes, and that they tend to accumulate on desirable sites at the foot of banks. Elucidation of this means of dispersal allowed an explanation of the high uniformity of the relatively young arctic flora.

Biology can be classified as basic research, applied research and the applications of research, but the 3 intergrade completely. A good example occurs in WHEAT production. Cultivated wheat has been hybridized from wild species. Further improvements depend on accurate information on wild species that may possess useful characteristics. Such information must be supplied by the systematic botanist. The cereal geneticist must develop techniques to transfer the appropriate genes into a wheat plant. The breeder must secure a balance of desirable characteristics to produce a new variety. Finally, propagators must increase stocks of the new variety for release to farmers.

Although much agricultural research is "applied," it may be necessary to revert to basic studies to solve problems, eg, in crop protection, food storage, plant pathology or veterinary medicine. The failure of early attempts to control wheat stem rust (Puccinia graminis) led to establishment of the Rust Research Laboratory in Winnipeg, where basic studies led to new understanding of wheat genetics, and the genetics and life history of the pathogen (agent of disease). Further information on the biology of rusts resulted from systematic studies of rusts of native plants. For agricultural crops in general, a botanist, chemist or mycologist may supply data to the geneticist and breeder; after full testing, the improved variety is propagated commercially.

Among other examples of successful interaction are the propagation of leaf-cutter bees to induce seed set in alfalfa, a practice which developed from pollination biology; the growth of the antibiotics industry from many years of laboratory testing and experiment; the field of genetic engineering, which developed from basic studies in microbial genetics and molecular biology - the new techniques developed help both industry and medical research, as in the identification and manipulation of potentially cancer-inducing genes. The fields that involve mainly applied research include ANIMAL BREEDING, animal diseases, WILDLIFE CONSERVATION AND MANAGEMENT, economic entomology, forest research, plant breeding, the study of PLANT DISEASES, soil survey and testing.

Most biological investigation in Canada is centered in university biology departments, in national and provincial museums or institutes, and in the laboratories of Agriculture Canada, Fisheries Research Board, Forestry Service, NATIONAL RESEARCH COUNCIL and Wildlife Service. Research may be published in bulletins, eg, of the National Museum of Natural Sciences or the Wildlife Service, monographs of Agriculture Canada, or a wide range of journals.