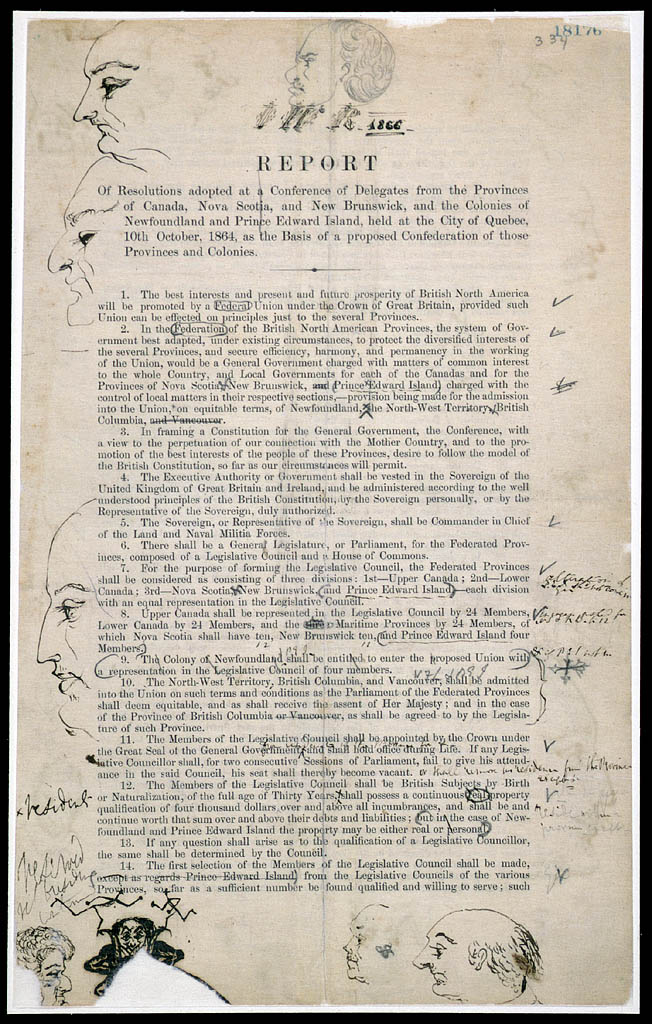 A document showing the resolutions of the Quebec Conference (1864), with doodles attributed to Sir John A. Macdonald.

The delegates adjourned the Quebec Conference on 27 October 1864. The decisions that emerged from their discussion in both Charlottetown and Quebec City were embodied in 72 resolutions. Fifty of them were crafted by John A. Macdonald. He was one of the few delegates with legal and constitutional training. “As it is, I have no help,” Macdonald told Sir James Gowan. “Not one man of the conference (except Galt in financial matters) has the slightest idea of constitution making. Whatever is good or ill in the Constitution is mine.”

Overview of the Resolutions

One of the main questions at both the Charlottetown and Quebec conferences concerned the distribution of powers between federal and provincial governments. It was decided that powers would be divided between a central Parliament and provincial legislatures. This would create a federal union where the interests of regions and minority populations could be defended. The provinces would have control over education, language and municipalities, among other things. The federal government’s powers would include control over currency, international trade and criminal law. Some areas, such as immigration and agriculture, would be shared. Both levels of government could raise taxes.

The delegates decided that Parliament itself would have two houses. The lower house, or House of Commons, would consist of elected members. They would represent their provinces according to population. (See also: Rep by Pop.) There would be 82 seats for Ontario, 65 for Quebec, 19 for Nova Scotia and 15 for New Brunswick.

It was decided that Ottawa would be the capital, and that the Crown, or the “Sovereign of the United Kingdom,” would remain the head of government and the keeper of “executive authority.” (See also: Sovereignty.)

A provision was made for other regions including Newfoundland, British Columbia and the “North-West Territory” (then called Rupert's Land). They could enter Confederation “on equitable terms” at a later time. It was also decided that the new federal government would help fund and finish construction of the Intercolonial Railway from Quebec City to the Maritimes. (This was a key condition for the Maritimes’ entry into Confederation.) 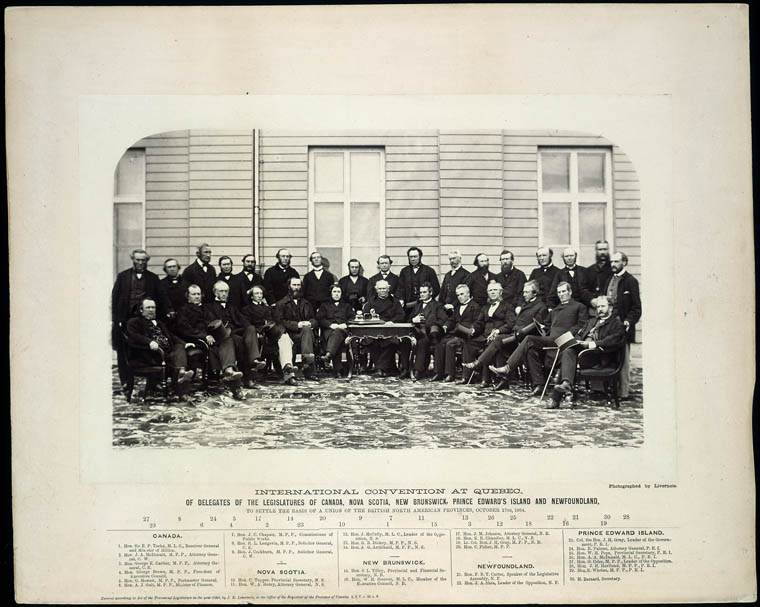 The resolutions were debated in various legislatures in the years to come. In 1866 and 1867, delegates at the London Conference — the final meeting in the Confederation process — passed the resolutions into legislation in the form of the British North America Act. It formed the basis of Canada’s Constitution and created the Dominion of Canada. The Act became law on 1 July 1867.