Role in the Canadian Economy

In 2020, goods and services imports equalled 33 per cent of Canada’s gross domestic product (GDP). Some 165,000 firms in Canada imported goods from countries around the world. The largest categories of goods that Canada imports include Automotive products ($115 billion); machinery ($69 billion); electronics ($72 billion); plastics ($45 billion); and energy ($37 billion). These imports don’t always involve the purchase of a consumer product such as a car or a laptop. Instead, much of the trade in automotive parts and machinery takes place within complex supply chains across the Canada-US border.

Since 2009, Canada has had a trade deficit; this means the value of its imports is higher than the value of its exports. This deficit widened during the latter half of the 2010s. It is mainly due to a gap between the imports and exports of goods. During that same period, Canada’s trade deficit in services improved.

Historically, dependence on imports has been viewed as a sign of economic weakness. European colonial powers, including France and England, believed that economic prosperity depended on exporting more than they imported. As a result, colonies such as Canada focused on exports of staple goods. (See International Trade; Mercantilism; Staple Thesis.)

The Mercantilist period effectively ended with the repeal of the British corn laws and the Navigation Acts in the mid-19th century. British North American (BNA) colonies then began setting their own import tariffs. In 1854, the US and BNA colonies signed their first free trade agreement, the Reciprocity Treaty. It was terminated in 1866.

After Confederation, Canada’s stance on imports focused on protecting Canadian industries from US competition. In 1879, Sir John A. Macdonald’s Conservative government adopted the National Policy. It was the country’s first protectionist economic strategy. This trade regime imposed high tariffs on foreign competitors. It was generally maintained by successive federal governments until the Second World War.

Each of these agreements reduced trade barriers, such as tariffs and quotas, for importers. The trend continued into the 21st century. Canada is now party to 15 free trade agreements with countries around the world. In 2018, Canada signed the Canada-United States-Mexico Agreement (CUSMA). It replaced NAFTA and came into force on 1 July 2020.

Canada’s balance of trade has both political and economic dimensions. (See International Trade.) Most economists argue that free trade brings higher productivity and lower prices for consumers; but in the short term, higher levels of imported goods can cause layoffs and closures of businesses. Critics have also argued that free trade agreements threaten Canada’s sovereignty and control over its economy and domestic affairs.

The original Canada–United States Free Trade Agreement was politically divisive. During the 1988 federal election, Liberal leader John Turner said during a debate that Prime Minister Brian Mulroney had “sold us out” and would reduce Canada “to a colony of the United States.”

After the victory of Mulroney’s Conservatives and the passage of the agreement, successive governments largely accepted free trade. Current debates on imports now focus on the regulation of foreign digital services like Netflix; managing relations with China as it becomes a major source of imports; and trade disputes with the United States around tariffs on products such as dairy and softwood lumber. (See Softwood Lumber Dispute.)

Canadian governments have developed import restrictions on some goods to protect national industries. In particular, imports of dairy products from the United States face steep tariffs above a certain quota (set at 3.5 per cent of the industry under CUSMA). (See also Supply Management in Canada.) Cultural products, such as music, have also been protected through provisions that require a certain level of Canadian content to be broadcast on radio and television. 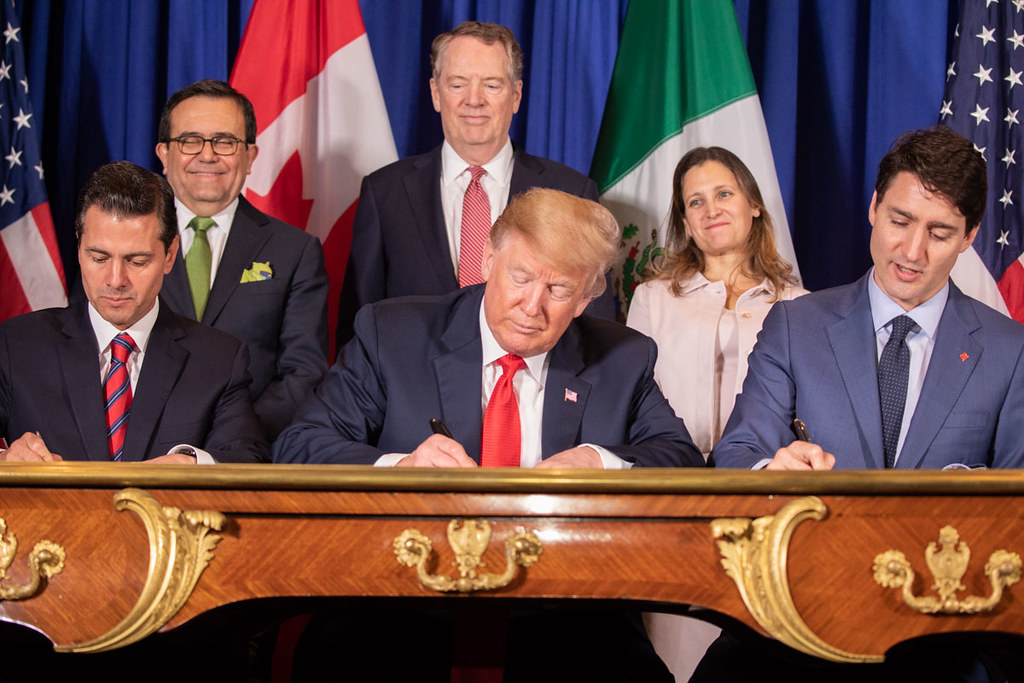