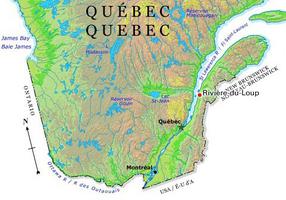 Rivière-du-Loup, Qué, City, pop 18 586 (2006c), 17 772 (2001c), inc 1874 under the name Fraserville. Rivière-du-Loup is located 200 km east of Québec City on the ST LAWRENCE RIVER. Built at the mouth of the river of the same name, it sits on land that belonged to the former seigneuries of Rivière-du-Loup, de Verbois and du Parc, awarded in 1673 to Charles Aubert de La Chesnaye, the richest trader in New France.

Rivière-du-Loup's development owes much to its location at the entrance to the Temiscouata Valley and portage. In 1783 the British administration built a military route through the town to facilitate communications with the other English colonies. Rivière-du-Loup became a major railway centre in the last 40 years of the 19th century, a terminal of the GRAND TRUNK RY (1860) and a departure point for the INTERCOLONIAL (1870) and the Temiscouata Ry (1887-88).

The forestry, pulp and lumber, and tourist industries have been major factors in its economic development, especially after closure of the railway repair shops. The city still benefits from seasonal seaway links with the N Shore.

Today, it has become a service-industry town, with emphasis on commerce, teaching and public administration. A paper mill employs several hundred people.