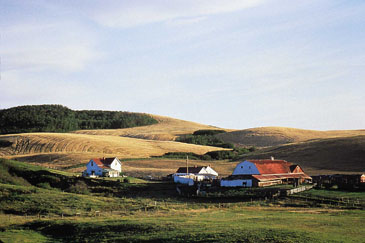 Wheat is the most important cereal in the world (Corel Professional Photos). 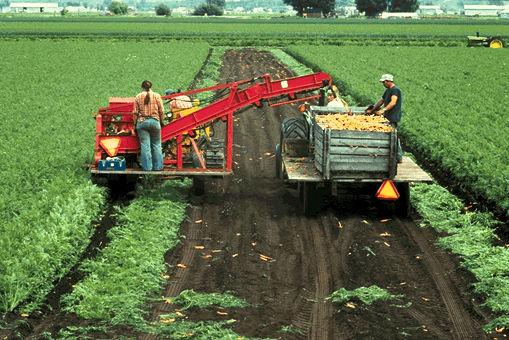 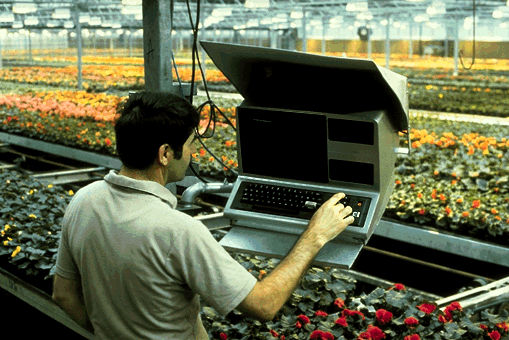 A computer is used to control the amount of light, the temperature and humidity in a greenhouse in Campbellvale, Ontario (courtesy Agriculture Canada).

These cattle are being grain-fed for about three months in preparation for slaughter. They are housed in separate pens to segregate the cattle by size, ownership, and sex. Image: Agriculture Canada. 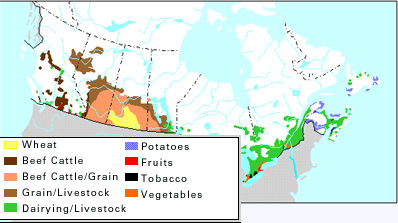 Canada's agriculture and food industries have changed greatly in the years since the Second World War. Growth in Canada’s economy, and associated social changes, have altered the way food is produced, processed, handled, sold and consumed. This has contributed to increased productivity from fewer, larger farms, and food processing and distribution firms. Improved transportation, lower costs and closer trade links with other nations have also made it possible for most Canadians (except those living in remote northern communities) to have access to affordable fresh foods throughout the year.

Since the Second World War, increases in income and the prevalence of dual-income families, together with the broad ethnic mix in the country's population as well as desires for food variety and healthy foods, have contributed to increased demand for pre-prepared or convenience foods, ethnic foods and fresh fruits and vegetables. Much of Canada’s agricultural production and food processing is relatively efficient, with lower costs than in many nations. On average, Canadians spend less than 10 per cent of their total household expenditure on food purchased in grocery stores for home consumption — a result of the combined effects of comparatively high levels of average income and relatively inexpensive foods. In contrast, the percentage of household expenditures spent on food in other industrialized countries varies from approximately seven per cent to 14 per cent. When expenditures on food eaten away from home are added to home-consumed food expenditures, it is estimated that Canadians’s food expenditures account for about 14 per cent, on average, of total household spending.

Liberalization of international trade has also increased productivity in agriculture and has contributed to the international competitiveness of many sub-sectors in the industry. It has also led to considerable exports of Canadian oilseeds, grains, pork, beef and livestock. Consequently, there is a positive net balance of trade in agri-food products between Canada and the rest of the world. Canadian agri-food imports include fruit and vegetables, beverages and processed foods (see food and beverage industries).

A large proportion of Canada's pork, beef and live animal exports are to the United States which, despite some trade tensions, is still Canada's largest export market and the largest source for Canada’s imports of farm and food products. Most oilseed and grain exports, which are dominated by canola and wheat, go to other, offshore markets. Japan, China, the European Union and Mexico are major export markets for Canada’s farm products. The composition of Canada’s agricultural production and exports changed somewhat in the last decade, reflecting changes in economic conditions and export demand which have led to increased exports of oilseeds and pulses, and less animal and meat exports. A change in federal government agricultural policy removed control of wheat exports from the Canadian Wheat Board in August 2012, although agricultural marketing boards perform a variety of marketing and regulatory functions on behalf of farmers for some other farm products.

Although Canadian primary agriculture has grown, it directly accounts for a much smaller share of national output and employment (less than two per cent each in 2011) than in earlier years. This shift is the result of growth in the Canadian economy and technical change in the industry, and is reflected in the longstanding, continuous trend toward larger, fewer and more specialized farms. This is due to lower costs of production per unit of farm output driven by the substitution of capital for labour through use of increasingly sophisticated machinery and other technology. As the average size and capital value of farms has increased, the number of people employed on farms — as well as the number of farms — has fallen.

Despite the trend to increased farm size, there are still many relatively small farms and much diversity in the revenues of different farms. For example, in 2010, many Canadian farms still had annual sales of $10,000 or less. While these micro-farms accounted for 21 per cent of all recorded farms, they made up only one per cent of total revenues. In contrast, output from the five per cent of largest farms (those with sales of $1 million and more) accounted for 49 per cent of total Canadian farm revenue that year.

The use of chemical fertilizers and pesticides has increased levels of farm output, lowered unit costs of farm production, and reduced pest-related waste and spoilage due to weeds and insects. Agricultural research leading to genetic improvements in animal breeds and crop varieties has also contributed to increased agricultural productivity, while agricultural education has improved farm management.

Prairie farmers are increasingly adopting environmentally friendly tillage practices, including more no-tillage and less summer fallow, to reduce soil salinization and erosion. Despite extensive use of agricultural chemicals by many farmers, a small (about 1.8 per cent in 2011) but increasing proportion of Canadian farms produce organic food.

With increasing size, there is a tendency towards incorporation of Canadian farms (in 2011, nearly 20 per cent were incorporated) and more use of rented land (some 41 per cent of farmland was rented in the same year). However, nearly all Canadian farms, including most incorporated farms, are owned and operated by farm families. In many instances, farming is only one of a number of income-earning activities for farmers and family members. Some work off the farm in local towns or nearby cities; others work for larger farmers. Some are farmers in transition, particularly those moving into farming. However, the average age of farmers is increasing and almost half of Canada’s farmers were age 55 or older in 2011.

Area and Use of Farmland

A relatively small proportion of Canada's land area is suitable for farming (about seven per cent). Of this farmable area, the majority (more than 80 per cent) is located in Western Canada. Some 38 per cent of total farmland is in Saskatchewan, while Alberta and Manitoba contain 31 per cent and 11 per cent, respectively. Ontario accounts for eight per cent of farmland, Québec for five, British Columbia for four, while Nova Scotia, New Brunswick and Prince Edward Island each account for less than one per cent and Newfoundland and Labrador for a fraction of one per cent.

Although farm size has continued to grow, this varies considerably by region, reflecting regional differences in the types of farming which are, in turn, related to differences in soils, climates, topography and proximity to markets. The largest acreage farms are found in the Prairie region of Western Canada, where there are many land-extensive crop farms that produce oilseeds (mainly canola), wheat, barley and other crops. Beef production also tends to be concentrated in this region. Average farm size in Saskatchewan, in which grain farming predominates, is 675 ha, or over two times the national average. Farms are similarly large in Alberta, where in addition to crop farming there is much beef production. Here, farms average 472 ha, or just over one and half times the national average. In Manitoba, the third Prairie province, farms average 459 ha.

In contrast to the Prairie region, average farm size is much smaller in British Columbia (132 ha), Québec (113 ha), Ontario (99 ha) and the Atlantic provinces (ranging from an average 161 ha in PEI to 61 ha in Newfoundland and Labrador). In aggregate, these regions include relatively large numbers of dairy and poultry farms that produce milk, broiler chickens, turkeys and eggs. These farm products continue to be relatively highly protected from import competition and are primarily sold for consumption in the domestic market. They are significant contributors to farm income in all regions except the Prairies, where they account for a more minor proportion of farm revenues. About 70 per cent of dairy production is concentrated in Québec and Ontario, providing 29 per cent of farm cash receipts in Québec and 17 per cent in Ontario (2010). These provinces, in addition to Manitoba, also include much hog production. Corn and soybeans are major crops in Ontario and Québec, as well as specialized crops including greenhouse, floriculture and nursery products. Vegetables and fruits are largely concentrated in Ontario, Québec, the Atlantic provinces and British Columbia.

The processing of farm and seafood products, food retailing, food service, transportation, handling and provision of input supplies to primary agriculture are major Canadian industries. In terms of sales, food and beverage processing is the country's second largest manufacturing sector, accounting for 16 per cent of manufacturing employment in 2010. Its largest components, in terms of the value of sales, are meat processing, followed by dairy products, beverages, grain and oilseed milling, bakery products and fruit and vegetable processing.

Government policy for agriculture (see Agriculture and Food Policy) and food is developed at both federal and provincial levels, and major programs are provided through federal-provincial agreements. Both levels of government provide significant support to agriculture. Direct and indirect support of Canadian farm income increased through the 1970s, but was reduced in the 1990s following international negotiations leading to the Agreement on Agriculture of the World Trade Organization. Since 1999, it has begun to increase again. The 1994 Agreement on Agriculture committed Canada and other member nations to reduce distortions in agricultural trade by: lowering tariffs; replacing non-tariff barriers by tariff-rate quotas that provide more import access to protected domestic markets; decreasing agricultural export subsidies; and reducing domestic support that distorts agricultural production and trade. In 1995 Canada eliminated the longstanding policy of the Crow Rate, which had subsidized the costs of rail shipment of grain to export points, and other transport subsidies. With higher grain freight rates, cheaper grain supplies in the Prairies initially encouraged increased livestock production and feeding.

Despite the 1994 trade reforms, international trade in agricultural products faces many barriers. As yet multilateral efforts to negotiate lower trade restrictions for agriculture, which began again in 2000, have not been successful, although efforts to pursue bilateral and regional trade negotiations have engaged many nations, including Canada. The major current support to Canadian agriculture is through transfers from consumers affected through the tariff-rate quotas that support supply management for dairy and poultry products. Payments related to continuing government programs include crop insurance and a series of farm income stabilization programs. Assistance in emergency conditions, such as major animal disease incidents, floods or drought, has also been provided. Programs that focus on food safety and export market development are other major areas of policy for the agricultural and food industry.

Since the beginning of the 21st century, world prices for agricultural products have tended to increase. Explanations include relatively slow increases in productivity of major crops (attributed to insufficient agricultural research and poor policies for agriculture in some nations), increasing demand for improved diets in growing middle income countries (like China and India), increasing use of crops for biofuels and lower grain stock reserves. Higher agricultural prices have been accompanied by increased costs of many farm inputs.

In recent years, the public is increasingly concerned about the environment, sustainability, climate change, food safety and animal welfare. In agriculture this includes a wide range of questions relating to such issues as soil and water conservation practices, use of pesticides and chemicals in crop production, use of antibiotics, growth promoters and confinement practices in animal agriculture and local food movements.

In a world where about one in eight people go hungry every day, Canadians are fortunate to enjoy relatively abundant, cheap and safe food supplies. This has come about as a result of major economic and technical changes in both the Canadian economy and its food and agricultural sectors during the past century.