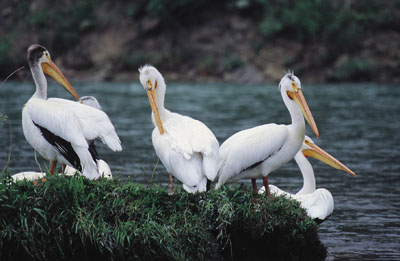 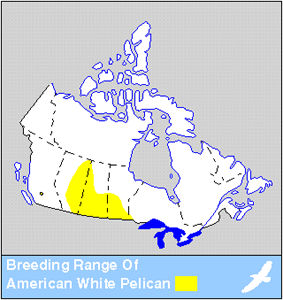 The Pelican family (Pelecanidae) consists of large water birds with long, flat bills, expandable throat pouches, and 4 toes connected by a web. Eight species occur worldwide, 2 in Canada. The American white pelican (Pelecanus erythrorhynchos) nests locally in the western provinces. The brown pelican (P. occidentalis), a marine species of the southern US, is a casual visitor to the BC coast and eastern Canada.

Characterized by a 32-36 cm orange bill, adult American white pelicans weigh 4.8-8.2 kg and have black-tipped wings, spanning 2.4-2.9 m. Flying pelicans form a line and, together, alternate between flapping and gliding flight. In flight, the head is drawn back until the bill rests on the breast. 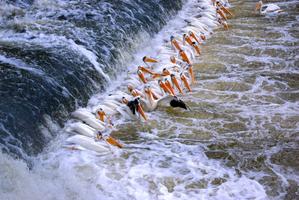 American white pelicans nest, colonially, on islands in remote lakes. The nest is a simple structure built on the ground. Most colonies contain fewer than 150 pairs. Nonbreeders frequent lakes away from breeding sites. Isolation during nest building and incubation is critical, as adults may abandon nests if disturbed. Primrose Lake, Sask, has the highest concentration of nests in Canada.

A gregarious, slow-maturing bird, the white pelican feeds from the water surface, trapping prey in the expandable lower bill and pouch. Birds often co-operate to drive prey into shallow water. Although often regarded as predators of sport fish, pelicans subsist primarily on coarse fish (perch, suckers, minnows and stickleback). The belief that pelicans carry fish in the pouch is false; prey are swallowed and regurgitated to young.