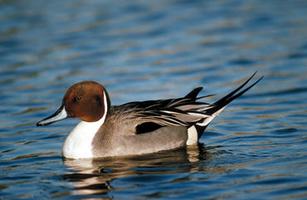 The habitat of the pintail is shallow bodies of water and marshes (Corel Professional Photos). 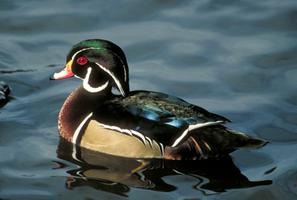 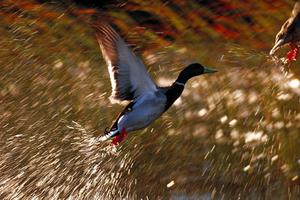 The mallard is one of the most adaptable ducks (Corel Professional Photos). Sound of the mallard (press the Sound button) courtesy Monty Brigham, Bird Sounds of Canada. 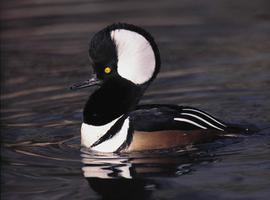 Waterfowl with short legs, webbed feet and narrow, pointed wings are known as ducks. A few island species are flightless but most are strong fliers and migratory (see migration). A race of the common eider (Somateria mollissima) of Hudson and James bays is nearly sedentary, even wintering in Hudson Bay. Ducks, geese and swans comprise a family (Anatidae) with 158 living or recently extinct species. Ducks have worldwide distribution, except for polar regions.

Canada's 29 breeding species belong to 4 tribes in one subfamily; 8 other species from this subfamily have occurred in Canada, as have 2 species of whistling duck (sometimes considered in a separate family) and the Labrador duck (Camptorhynchus labradorius), last seen in 1878. Mandarin ducks (Aix galerielata), escaped from captivity, have shown indications of establishing a feral breeding population in coastal BC; successful breeding has not yet been demonstrated.

Bills of mergansers are long and tubular with deeply toothed edges. All other ducks have a flat, wide bill with fine serrations. The bill is swollen into a spoon shape in northern shovelers (Anas clypeata). Male breeding and winter plumage is distinct from that of females and post-breeding males. Plumage is often highly coloured in males, especially in the wood duck (Aix sponsa). An unusual feature of ducks is that all primaries (flight feathers) are moulted together, making the birds temporarily flightless.

Legs of dabbling ducks are centrally placed, allowing easy takeoff and walking; those of diving ducks are placed far back, aiding in diving but impeding walking and necessitating "pattering" along the water surface prior to takeoff.

Most ducks are gregarious, gathering in large feeding, moulting and wintering flocks. At early stages of nesting, males in several species are territorial, but pair bonds are temporary and females undertake all incubation and care of young. Female Barrow's goldeneye (Bucephala islandica) and occasionally common goldeneye (B. clangula) are also territorial.

Nests of most species are of grasses and on the ground, often under shrubbery and usually near water. Wood duck, common goldeneye, bufflehead (B. albeola) and the hooded merganser (Lophodytes cucullatus) nest in holes in trees; common and red-breasted mergansers (Mergus merganser and M. serrator respectively) may nest in crevices underground. Mallards (Anas platyrhynchos) sometimes nest in trees or inside buildings. Several marsh-dwelling species have floating nests. The black-headed duck (Heteronetta atricapilla) of South America always lays its eggs in nests of other species; such brood parasitism is frequent but less developed in redheads (Aythya americana) and infrequent in ruddy ducks (Oxyura jamaicensis).

Clutches are usually large, 4-16 eggs in Canadian species. Downy young are active at hatching, swimming within hours. Females guard and brood ducklings but do not feed them.

Ducks nest in aquatic habitats ranging from marshes and tundra ponds to fast-flowing mountain streams and large lakes across Canada. Dabbling ducks are most common on the Prairies; seaducks range far into the Arctic. The American black duck (Anas rubripes) is centered in the Maritimes, Québec, and formerly eastern Ontario; most other species are widespread or primarily western.

Barrow's goldeneye and harlequin ducks (Histrionicus histrionicus) breed in disjunct populations on both coasts. The eastern Canadian population of harlequins has declined markedly due to hunting and has been classified by COSEWIC as endangered. The cinnamon teal (Anas cyaoptera), primarily of interior BC and extreme southwestern Alberta, has the most localized range in Canada. The gadwall (Anas strepera), formerly western for the most part, has been increasingly expanding eastward.

Most species gather along the coasts and Great Lakes in winter or fly south. Thermally maintained reservoirs have resulted in increasing numbers of wintering ducks, even on the prairies. Two Eurasian species, the Eurasian widgeon (Anas penelope) and tufted duck (Aythya fuligula), are increasingly wintering in coastal BC and more frequently occuring in inland and eastern areas.

Mallards and Muscovy ducks (Cairina moschata) are widely domesticated for food; the common eider is semidomesticated in Iceland for down. Ducks are a favourite object of hunting.