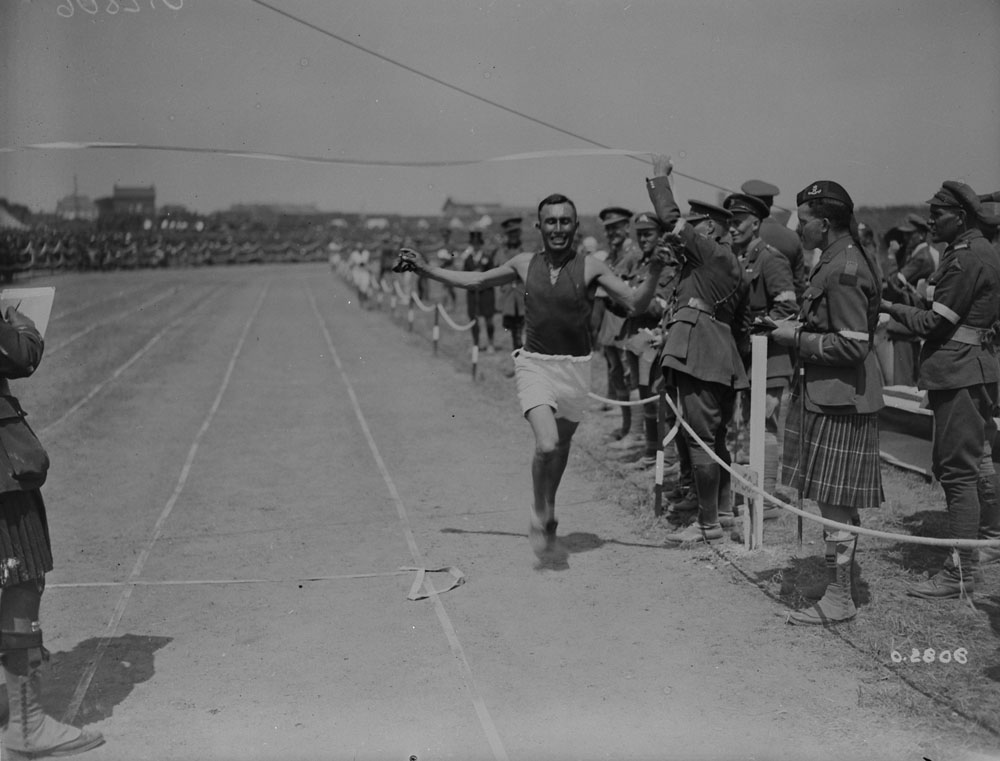 Around the age of 13, Joseph Benjamin Keeper was sent to the Brandon Residential School, run by the Mission Board of the Methodist Church. (See also Residential Schools in Canada.) While there, he excelled in track and field events and showed a talent for middle-distance running. In 1909, he placed second at an indoor mile event (1,609 m) in Brandon, Manitoba. The next year, he moved to Winnipeg and joined the North End Amateur Athletic Club to continue running.

Joseph Benjamin Keeper won seven-mile road races (11,265 m) in 1910 and 1911. In 1911, he also set a new national record for the 10-mile run (16,093 m) and became Manitoba’s representative at the Dominion Championships in Montreal. His second-place finish to an American runner in the three-mile event (4,828 m) resulted in Keeper being selected to join the Canadian Olympic Team for the 1912 Stockholm Summer Olympics. He participated in the 5,000 and 10,000 m events and placed fourth in the latter. Keeper is still the highest-placing Canadian ever at the Olympic Games in the 10,000 m event. (See also Canada and the Olympic Summer Games.)

Joseph Benjamin Keeper lost the chance to compete in another Olympic Games. The 1916 Berlin Summer Olympic Games were cancelled due to the First World War. Keeper enrolled in the 203rd (Winnipeg Rifles) Battalion of the Canadian Expeditionary Force on 1 May 1916 at Norway House, Manitoba. Shortly afterward, on 8 June, he was appointed acting corporal. He sailed from Halifax with his unit on the SS Grampian on 24 October, and arrived in Liverpool, England, on 4 November. From there, the unit left for Bramshott, a major camp for Canadians.

Keeper was transferred to the 107th (Timber Wolf) Battalion at nearby Witley Camp in January 1917. The 107th Battalion had a large number of Indigenous soldiers in its ranks. (See also Indigenous Peoples and the First World War.) After a successful effort to prevent the unit from being broken up to provide reinforcements to other units, the battalion was converted and renamed the 107th Pioneer Battalion. Pioneer units were trained to fight as infantry, as well as to perform limited military engineering tasks.

Due to his athletic ability, Keeper served as a dispatch runner. He was responsible for carrying handwritten messages to troops at the front. It was one of the most dangerous jobs there was. Runners had to cross the battlefield without the shelter offered by trenches. Additionally, they had to retrace their steps back to inform command staff that the message had been passed.

At a divisional sports meet in France on 19 September, Keeper placed first in the one- and three-mile races (1609 and 4828 m). Ten days later, he repeated his performance for the same distance at the Canadian Corps sports meet. Coincidentally, famous Onondaga distance runner Tom Longboat finished second in both of these races at the Corps meet.

In late May 1918, the 107th Battalion was disbanded. Its soldiers dispersed among a number of newly formed engineer units in preparation for the final Allied push, beginning in August 1918. Keeper was transferred to the 1st Canadian Engineers Battalion. The Battle of Cambrai took place in northern France from 27 September to 11 October and was one of the last battles for the Canadians. Keeper was awarded the Military Medal on 23 September for his dedicated service during the preparations for that battle.

In his last international competition, Joseph Benjamin Keeper represented Canada in the 10,000 m cross-country run in June 1919 at the Inter-Allied Games in Paris, France. He returned to Canada from Britain and was released from the military in Winnipeg on 27 August 1919. He ran in a few events in that city but was overshadowed by younger runners.

In 1921, he left Winnipeg and returned to Norway House. He worked for the Hudson’s Bay Company post there for 30 years and raised a family before he retired in 1951.

By 1969, Keeper was a patient at Winnipeg’s Deer Lodge Hospital, a facility for veterans. During an interview, he joked with a reporter, “I couldn’t walk five yards, much less five miles.” He died in the hospital in 1971, when he was 85 years old.

DID YOU KNOW?
One of Joseph Benjamin Keeper’s sons, Joseph Irvine, was inducted as a Member of the Order of Canada in 1992. He was a founding member of the National Indian Council (now the Assembly of First Nations). Keeper’s granddaughter, Tina Keeper, is an actress and recipient of many awards, including the Order of Manitoba in 2002. She also served as the Liberal Member of Parliament for Churchill from 2006 to 2008.