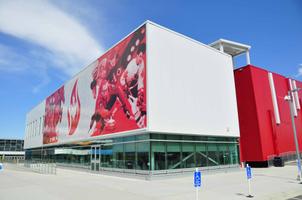 With 40,000 square feet of room, Canada's Sports Hall of Fame includes 12 galleries, a theatre and interactive exhibits. The Hall of Fame maintains a substantial archives of sport, including 60,000 historical photographs and 100,000 artefacts. It also conducts educational programs for school age children.

The annual election of honoured members draws the most public attention. Chosen by a selection committee of 10 to 16 people, men and women are elected to two categories, Athletes or Builders. Normally, athletes are only elected after a four-year waiting period following their retirement from major championship competition. Over 600 Canadians have been inducted into Canada’s Sports Hall of Fame. Among the most interesting inductees are Canada's greatest thoroughbred, Northern Dancer, the racing yacht Bluenose and the world champion hydroplane Miss Supertest.

The Hall of Fame is administered by a small staff responsible to a board of governors. It is open to the general public throughout the year.

Soccer Hall of Fame and Museum