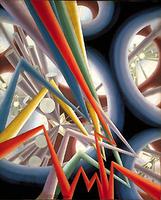 Bertram Richard Brooker, artist, novelist, poet, journalist, advertising executive (b at Croydon, Eng 31 Mar 1888; d at Toronto 21 Mar 1955). He immigrated to Portage la Prairie, Manitoba, in 1905 and worked with the Grand Trunk Pacific Railway. He then owned and operated a motion picture theatre in Neepawa, Manitoba, subsequently working on newspapers in Manitoba and Saskatchewan. Brooker moved to Toronto in 1921 as an advertising executive.

As an artist - working in oil, watercolour, pencil, ink and print media - he executed both abstracts and realistic works. Brooker became the first Canadian artist to exhibit abstracts in 1927; Sounds Assembling (1928) and Alleluiah (1929) are early important paintings.

As a novelist he won the first Governor General's Award for fiction with Think of the Earth (1936). He initiated, introduced and edited The Yearbook of the Arts in Canada 1928-1929, and a second volume in 1936. Brooker was an active member of Toronto's cultural life, painting, writing both prose and poetry, and regularly reviewing contemporary art and literature.