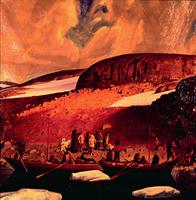 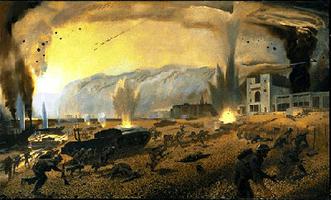 Charles Fraser Comfort, painter (b at Edinburgh, Scot 22 July 1900; d at Ottawa 5 July 1994). Comfort came to Winnipeg in 1912 and studied art there and at New York City (1922-23) with Robert Henri. His friendship with the GROUP OF SEVEN, his familiarity with the work of Paul Cézanne and other modernists, his interest in the history of art, and his work as a graphic designer in Winnipeg (1914-25) and Toronto (1925-36) were the major influences on his art.

The expressive design and dramatic characterization of his large portraits of the 1920s and 1930s are also evident in his later landscapes as well as in his murals for the Toronto Stock Exchange (1937), the first modern interpretation of mural work in Canada. His numerous executive responsibilities in art societies (including president of the Royal Canadian Academy of Arts, 1957-60) and his record as a war artist (1943-46) resulted in his becoming the only artist to be appointed director of the National Gallery of Canada (1960-65). He was made an Officer of the Order of Canada in 1972.