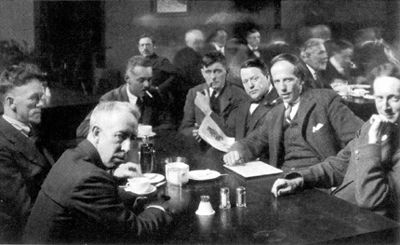 The original members of the Group of Seven were Franklin Carmichael, Lawren Harris, A.Y. Jackson, Franz Johnston, Arthur Lismer, J.E.H. MacDonald and F.H. Varley. Tom Thomson was a peer and a leading influence but died before the group was formed. All except Harris made their living as commercial artists. MacDonald, Lismer, Varley, Carmichael, Johnston and Thomson worked together at Grip Ltd., a graphic design firm in Toronto. Harris, as heir to the agricultural implements manufacturer Massey-Harris Co. Ltd., was independently wealthy.

In 1926, after Franz Johnston’s resignation A.J. Casson was made a member. The Group realized they could hardly call themselves a national school of painters as long as they all lived in Toronto. They admitted Edwin Holgate of Montreal in 1930 and L.L. FitzGerald from Winnipeg in 1932. This gave the organization a wider geographic base.

Emily Carr, famous for her paintings of the wilderness and Indigenous culture of the Northwest Coast, was influenced by the Group, and particularly by Lawren Harris. He once declared to her, “You are one of us.” However, she was never an official member.

Four decades after Confederation, when the Group of Seven came on the scene, Canada was finding its feet as a nation — politically, socially and economically. In the realm of culture, however, it had not yet wrested its independence from Old World traditions. Canadian landscape art consisted primarily of anonymous views seen through the cloudy screen of European academia. (See also: Canadian Painting in the 19th Century.) The small community of Canadian art collectors had little interest in artistic innovation.

In this atmosphere, a group of painters and commercial artists befriended each other in Toronto between 1911 and 1913. They were drawn together by a common sense of frustration with the conservative quality of most Canadian art. They began meeting as a kind of mutual support group, often having lunch together at the Arts and Letters Club of Toronto. They would look at one another’s paintings, share ideas and discuss technique.

With his instinctive technical abilities and his intense love of the North, Tom Thomson had all the elements necessary to become a great painter.
(courtesy Library and Archives Canada/C-17399)

Since Thomson died in 1917, he never became a member of the Group. However, he was an important influence on the other artists and had a profound effect on the formation of the group. A fishing guide and occasional forest ranger in Algonquin Provincial Park, he was an avid outdoorsman. He encouraged the other members to paint the rugged landscape of Northern Ontario. It was here they found the imagery that would imprint itself on the Canadian consciousness.

However, the turning point in their search for a style came in 1912, when MacDonald and Harris travelled to Buffalo to see an exhibition of contemporary Scandinavian painting. The men were struck by the approach of the Scandinavians. They used simple areas of flat, bright colour to create vivid depictions of a landscape. Macdonald and Harris realized that the subjects of these paintings could as easily have been Canada’s Northern wilderness. The synthesis of Northern subject with this new approach created the distinctive images that would become the hallmark of the Group of Seven. 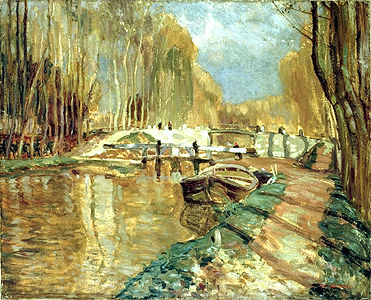 The members of the group were romantic, with mystical leanings. They zealously presented themselves as Canada’s first national school of painters. This provoked the ire of the artistic establishment, which hated their rhetoric even more than their paintings.

From the start, the Group’s exhibitions sparked controversy. (One review of their first exhibition compared the works to “the contents of ‘a drunkard’s stomach.’”) If anything, it was this heated debate that kick-started their fame. The negative reviews and letters to the editors received clever and passionate responses from the painters and their supporters. The discussion was always directed to the importance of their work as the product of true nationalistic expression. 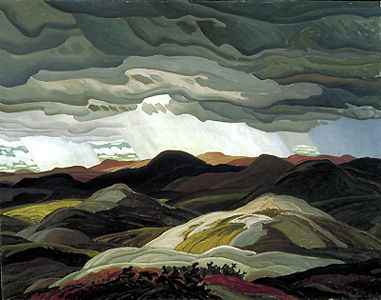 Eric Brown, director of the National Gallery of Canada, always supported the Group. He began buying their paintings for the gallery’s collection several years before the Group was officially formed. In 1924 and 1925, he made sure they were well represented in Canadian art shows at the prestigious Wembley exhibition in England. This enraged many members of the Royal Canadian Academy, who felt that the Group were given an unfair advantage. However, British press reports were so favourable that both Brown and the Group felt vindicated.

Other factors also contributed to their success. Several of the Group were excellent teachers, writers and speakers. They worked energetically with the National Gallery and with other groups to mount touring exhibitions that showcased their works. Shows were held in the United States, Great Britain and Paris. Another factor in their favour was that the bright colours and bold patterning of their paintings were ideally suited to reproduction and mass distribution.

With the support of the National Gallery and friends at the Arts and Letters Club and the Canadian Forum, the Group’s influence steadily spread during the 1920s. However, by the time the group disbanded in 1933, it had become as entrenched, and in some ways as conservative, as the art establishment it had overthrown. Its influence has therefore been a mixed blessing. The next generation of significant Canadian painters emerged in Montreal, where Paul-Émile Borduas and 15 members of the Automatistes Group signed the Refus Global manifesto in 1948.

The Group of Seven rebelled against the constraints of 19th-century naturalism. (See also: Canadian Painting in the 19th Century.) They tried to establish a more equitable and independent relationship between art and nature. In this sense, they were similar to European fin de siècle symbolists and post-impressionists such as Edvard Munch, Paul Gaugin and Émile Bernard. These masters were a key influence on the group’s aesthetics.

The group shifted emphasis away from similitude (the imitation of natural effects) toward the expression of their feelings for their subjects. They often painted together, both in the wilderness and in the famed Studio Building, which Harris and arts patron Dr. James McCallum built in Toronto’s Rosedale neighbourhood in 1914. As a result, their paintings developed along similar lines. Their early works usually have heavy impasto and bright colours. They are boldly summarized and draw attention to surface patterning.

Following a visit to the stark north shore of Lake Superior in 1921, Lawren Harris began to radically simplify the colour and layouts of his canvases. MacDonald, Carmichael and even Varley soon adopted similar methods. They began using thin pigment and stylized designs for many paintings. Harris went further than the others, however. By the mid-1920s, he had reduced his paintings to a few simplified and nearly monochromatic forms. Ten years later, he became the only member of the Group, and one of the first Canadian artists, to turn to abstraction.

Paintings by members of the Group of Seven can be found in most Canadian public art galleries, with notable collections at the National Gallery of Canada, the Art Gallery of Ontario and the McMichael Canadian Art Collection.

The Group’s depictions of the rugged wind-swept forest panoramas of the Canadian Shield were eventually equated with a romanticized notion of Canadian strength and independence. By the peak of their fame in the mid-1950s, reproductions of their paintings hung on classroom walls in every school in the country. Their works held pride of place in Canadian museums. Every discussion of Canadian art inevitably acknowledged their importance to the evolution of a “national vision.”

Nationalism created the Group of Seven, but in the end, it limited their accomplishment. In time, their influence waned. The Group was so successful in presenting their art as the visual expression of nationalism that the quality of their art is often overlooked. Taken as a whole, the members of the Group varied in achievement, just as individual works varied in quality. Often the most celebrated paintings, the ones most commonly reproduced, seem overblown and stale when seen in person. Their small oil sketches, however, especially those by MacDonald, Varley and Jackson, as well as those by Thomson, include some of their most inspired paintings, full of life and feeling.

Nevertheless, The Group introduced the idea that Canadian art could be important, that it could make a noise, and that it could earn a place on the international stage. It galvanized the national art community and ultimately stimulated the development of the museums and government bodies that would pave the road for artists who followed. Harris and Jackson, in particular, influenced and encouraged the next generation of Canadian artists. Lismer, MacDonald and Varley all became distinguished and influential teachers.