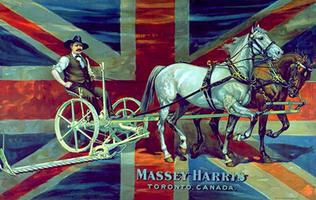 The chromolithograph (an innovation of the 1840s) helped make a once-expensive technology competitive with wood and steel engraving (photo by T.E. Moore/courtesy Varity Corp).

Agricultural implements industry comprises establishments involved in manufacturing a range of farm machinery, including combines, cultivators, harrows, harvesters and threshing machines. Canada's farm equipment industry had its beginnings in the mid-19th century, when the establishment of local iron foundries stimulated development of farm implement manufactories. Some of the earliest of these companies (including Massey, Harris, Cockshutt, etc) were established in the Lake Ontario district. Many early manufacturers failed or were absorbed into larger companies, while other new companies opened. In the 1990s literally hundreds of manufacturers and distributors of farm equipment market their products in Canada. These enterprises range from large, multinational companies that produce a broad range of machinery and implements to smaller, specialty-line manufacturers.

In 1997 there were 247 manufacturers of agricultural implements in Canada, employing 11 101 workers. Only 2 establishments employed more than 1000 workers; 90% of establishments employed fewer than 100 workers. For the larger, "full-line" manufacturers, the Canadian operations are part of their worldwide production network. Most of the innovative, smaller establishments, which specialize in a small range of equipment (ie, "short-line" manufacturers), are Canadian owned. Many of these are found in the Prairie region. A small number of these short-line manufacturers are branch plants of European companies. The value of shipments in 1997 was $1.57 billion, up from $1.08 billion in 1990.

Canada's farmers buy over $2-billion worth of machinery and implements annually, including an average of some 19 000 tractors, 3500 swathers, 4000 grain combines and a host of balers, plows, diskers and other harvesting and tillage tools. A large portion of the farm machinery purchased for Canadian farms, including combines, are imported. The main sources of these imports are the US, the EEC and Japan. The Canadian manufacturing sector, with a base of short-line manufacturers and major manufacturing facilities of some multinationals, exports about 60% of its production. On average Canada has a $1 billion deficit in the farm machinery trade. The industry is represented by the Canadian Farm and Industrial Equipment Institute, Burlington, Ontario, the Prairie Implements Manufacturers Association, Regina, and the Association of Agricultural Equipment Manufacturers of Québec, Montréal.

Farm equipment markets in North America have always been cyclical in nature, with predictable 5- to 7-year cycles. However, with the economic downturn which began in the early 1980s, farm equipment sales began a downward spiral that continues into the 21st century. For example, in 1979, sales of farm tractors in the 2-wheel drive category, 40 hp and over, totalled 23 383 units; in 1986, 12 584 units were sold, a drop of 45%. Similarly, some 5000 large, self-propelled combine harvesters were sold in 1979; this figure fell to 2818 in 1986. Most other lines of farm equipment have suffered similar sales reductions in the same period. The industry has adjusted by lowering break-even points and closing factories on the assumption that 1986 sales levels are the normal level. Although all manufacturers and distributors suffered, some of the large companies, such as Massey-Ferguson Ltd. (now Varity Corp), Versatile, International Harvester, the White Farm Equipment organization and others, found themselves in particularly severe financial difficulties. International, White, Versatile and others have been purchased by competitors and Massey-Ferguson was totally restructured, with unprofitable divisions sold off or simply disbanded.

Other changes in the farm equipment industry in North America have been the result of the economic depression in agribusiness. Many full-line companies that had produced a broad range of agricultural machines and implements are now concentrating on manufacturing a limited line of key products. Many companies are also "jobbing out" specialty lines previously built in-house, thus freeing capital, reducing overheads and providing better inventory planning. The result is that there are fewer and leaner manufacturers to meet the decreased machinery demand of the late 1990s.

In the last 50 years, the number of people engaged in farming has declined radically and hectarages farmed have increased slightly. These changes have been made possible by developments in farm machinery that permit Canadian farmers to till, seed and harvest ever-larger hectarages with less expenditure of time and labour.

In the past, farmlands were continually cultivated and many passes were made across the field to prepare the ground for seeding. Modern tillage practices seek to minimize disturbance of the soil surface to conserve vital topsoil and its nutrients (see soil conservation). Tilling implements have been designed to prepare seedbeds with little disturbance of the surface. Thus, while the moldboard plow continues to be used in farming in the moist conditions of eastern Canada, the modern chisel plow, which features a series of cultivating chisel points for preparing a seedbed while disturbing the ground surface only minimally, is popular in the Prairies. The industry has also developed tillage implements that leave stubble from previous crops in place, thus retaining the nutrients that such residues provide and helping to control erosion.

To complement changing tillage practices and equipment, modern seeding implements have been developed for a wide range of seedbed conditions from sod to well-prepared seedbeds. Air seeders have already proven to be efficient in seeding through previous crop stubble, particularly in dry-land farming areas in western Canada. A sod seeder will allow farmers to plant a crop with no seedbed preparation. The same equipment can also be used in the precision application of fertilizer and pesticides.

Modern combine harvesters are capable of harvesting a broad range of crops, including wheat, barley, corn and soybeans. They can cut and harvest a swath as wide as 10 m in a single pass, thus allowing the farmer to harvest hundreds of hectares per day. Technological advances include computerized monitoring systems to provide the operator with information on grain loss, damage and rate of speed for optimum performance.

Swathers or windrowers, machines designed to cut grain and leave it in lines ready for pickup, are widely used in areas where ripened grain requires some drying prior to harvesting (as in western Canada). When farmers judge the time is appropriate, they harvest the precut crop with a special combine pickup table and the final harvesting steps take place.

Technological advances in tractor manufacturing during the last 20 years have been dramatic. The typical modern farm tractor is diesel powered (over 90% of all self-propelled farm machines have diesel engines), with a rating of about 90 hp, although models ranging from small 9 hp units up to large 4-wheel-drive units of over 400 hp are being marketed. Many of these provide a wide range of computerized operating features, eg, digital gauges that report wheel slippage, recommended gear settings and information regarding fuel efficiency and productivity. Tractors with front wheel assist and front-mounted 3-point hitches and PTO (European innovations) are expanding their market share, particularly in eastern Canada.