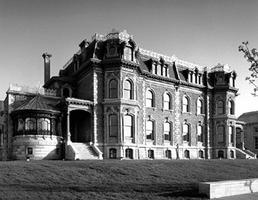 The design of the CCA incorporates the 1874 Shaughnessy House that director Lambert saved from demolition (photo by Brian Merrett: www.merrettimages.ca/).

William Tutin Thomas, architect (b at Birmingham, England 1 February 1829; d at Montréal 26 June 1892). Thomas was quick to follow his father, William THOMAS, into the architectural profession. He assisted his father in Toronto from the mid-1840s, and was then placed in charge of the firm's Hamilton office when it opened in 1851. He became a partner in the Toronto firm, which was renamed William Thomas and Sons in 1857. After the death of his father in 1860 Thomas completed the firm's commitments in Toronto, and in 1864 joined his brother Cyrus (1838-1911) in Montréal, where he became one of the most prolific anglophone architects of his time.

His commercial buildings include the robust and exuberant Caverhill Block, Montréal (1865-66), which he co-designed with his brother. Others are the Tiffin Block, Montréal (1871), the Prescott Town Hall (1874), and Lisgar Collegiate, Ottawa (1874). Thomas was commissioned by Montréal's English elite, including the railroad barons of the CANADIAN PACIFIC RAILWAY and members of Parliament, who hired him to design their opulent residences in the neighbourhood of the "Square Mile." Among them, George Stephen's (later Lord Mount Stephen) house, now the Mount Stephen Club, was the country's most sumptuous Italianate residence of its time. Thomas also designed the Shaughnessy House (1874-75), which was converted in 1985-89 by architect Peter ROSE and Phyllis LAMBERT into the CANADIAN CENTRE FOR ARCHITECTURE.

After his death 2 of Thomas's sons, C.S. and W.B. Thomas, followed him in the family architectural profession, training and assisting architects until 1901.