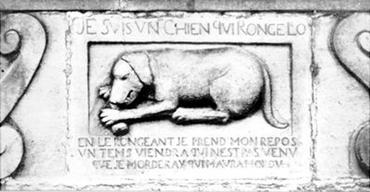 The many legends connected with the Golden Dog all turn on revenge and end in tragedy (courtesy Metropolitan Toronto Reference Library/T34788).

William Kirby, novelist, journalist (b at Kingston-upon-Hull, Eng 23 Oct 1817; d at Niagara-on-the-Lake, Ont 23 June 1906). Author of a classic English Canadian historical novel, The Golden Dog (1877), Kirby also edited the Niagara Mail. Immigrating with his parents to the US in 1832, Kirby arrived in Niagara in 1839, where his house still stands. A grandmother had been a United Empire Loyalist. He married into a family of prominent Loyalists and established himself as a major figure in that tradition, delivering the principal address at the 1884 UEL centennial celebration.

Still in print in an abridged edition, The Golden Dog is a swashbuckling historical romance. Based upon historic figures, the product of meticulous research, the novel depicts moral progress leading from the corruption of the last days of New France to French Canada's incorporation into the loyal, upright Canadian state. A Loyalist version of history also informs his epic poem, The U.E.: A Tale of Upper Canada (1859).

Glengarry School Days: A Story of the Early Days in Glengarry, by Ralph Connor (Charles William Gordon), was published in Toronto, New York and London, 1902.
×