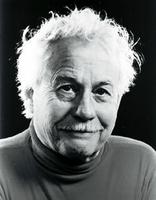 William Ormond Mitchell, novelist, dramatist (b at Weyburn, Sask 13 Mar 1914; d at Calgary 25 Feb 1998). In his treatment of prairie settings and language, W.O. Mitchell depicted the Canadian West in fiction and influenced many later writers, including Rudy WIEBE, Margaret LAURENCE, and Robert KROETSCH. Known and beloved across the country as both a writer and larger-than-life prairie icon, Mitchell was described in a eulogy by broadcaster Rex Murphy as a "lecturer, performer, stage raconteur, friend of a legion of fledgling writers, ... a 'presence' in the life and minds of Canadians."

In 1947 Mitchell achieved instant recognition with the publication of his classic WHO HAS SEEN THE WIND. The novel examines the initiation of the boy Brian into the meaning of birth and death, life, freedom and justice. The children and the eccentrics, the ever-drunken Ben and the madman Saint Sammy, are the most vivid characters. Mitchell portrays the beauty and power of the prairie and the wind, symbolizing God. Mitchell's second novel, The Kite (1962), is also concerned with life and mortality. Here Mitchell combines comic anecdotes with a more archetypal theme of the quest that ends in celebration and immortality.

The Vanishing Point (1973) was a reworking of an early unpublished novel. Set on the Paradise Valley Reserve, its theme is the resolution of alienation; it is an affirmation of racial and personal interconnectedness. His novel How I Spent My Summer Holidays (1981) returns to the theme of initiation, but the vision is much darker. Hugh leaves childhood innocence to pass into a world of betrayal, guilt, repression and violence. In the end, the old man Hugh is left only with knowledge. Since Daisy Creek (1984) is a contemporary Canadian Moby Dick. Mauled by a magnificent grizzly, Colin Dobbs, a failed novelist, suffers mental as well as physical scars, and seeks to heal himself through writing. The salty Dobbs and his feisty daughter Annie are Mitchell's most vivid characters since Daddy Sherry.

Mitchell also wrote many plays for radio and TV. The popular Jake and the Kid (1961) originated in stories written for Maclean's. The series ran weekly on CBC Radio 1950-56 and made Mitchell a national celebrity. The eccentric characters, tall tales and local dialect of Crocus, Sask, added to the audience's enjoyment. The series was televised in 1961. The early radio plays The Devil's Instrument (1949) and The Black Bonspiel of Wullie MacCrimmon (written 1951, published 1965) were later revised as full-length plays; the latter was staged in 1979 by Theatre Calgary as were The Kite (1981) and 2 plays written for the stage, Back to Beulah (which won the Chalmers Award, 1976) and For Those in Peril on the Sea (1982). These plays were published in Dramatic W.O. Mitchell (1982). He also wrote a musical, Wild Rose, in 1967. The audio book An Evening with W.O. Mitchell (1997) features the author reading from his own work in his inimitably dramatic style.

In 1973 Mitchell became a Member of the Order of Canada. He was awarded several honorary degrees and was the director of the Writing Division, Banff Centre 1975-85. He received the Stephen Leacock Award for his book According to Jake and the Kid (1989) and published a mystery, For Art's Sake, in 1992, followed by an illustrated edition of The Black Bonspiel of Willie MacCrimmon in 1993. In 1992 he became an honorary Member of the Privy Council. After his death in 1998 the W.O. Mitchell Literary Prize was established for an individual who has produced a substantial body of work and who has acted as a mentor to new writers.