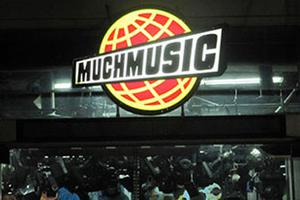 As seen on the historic Queen Street West building, circa 2009 (photo by David Tross).

Southeast corner of Queen and John Streets was home to the Methodist Church offices circa 1919 (courtesy City of Toronto Archives/Fonds 1231, Item 761).

Built for the headquarters of the Methodist Book and Publishing House, the building is now the home of Bell Media (photo by James Marsh).
PreviousNext

"From Methodist Publisher to MuchMusic"

Whether it has housed publishers or broadcasters, 299 Queen Street West has always had an artistic, if slightly off-kilter bent. The CP24 news truck lodged in the east wall suits the humorous design touches that were added when the structure was built in 1913 as the headquarters for the Methodist Book and Publishing House, the publishing arm of the Methodist Church of Canada (see Methodism).

Architectural journalist Patricia McHugh noted that the designers of the Gothic-influenced building "were not above a little Gothic fun as well, pinning grotesque readers and scribes along the second-storey horizontal band." Though the exterior was designed to look old, the building was entirely modern. Beneath the glazed terra cotta façade is a steel structure.

The Publishing House was renamed The Ryerson Press in 1919, and continued to serve the United Church of Canada after the Methodists helped form that new denomination in 1925.

In 1985, the building was purchased by CHUM/CITY-TV (see CHUM Limited), and the building was renovated to become the interactive heart of the CITY-TV stable of channels. People came down to express themselves by paying a dollar to activate Speakers Corner, danced to the latest beats on Electric Circus, attended a Cityline taping, or lined up to catch a glimpse of their favourite musicians on MuchMusic. Now the home of Bell Media (see Bell Canada Enterprises), the building remains a dynamic, cultural hub on Queen Street West. 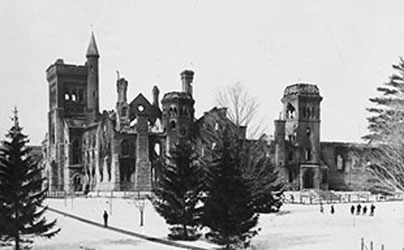