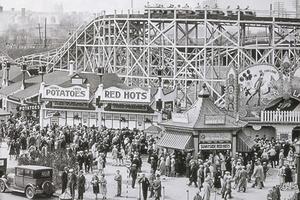 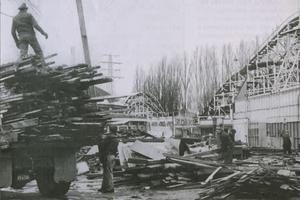 Sunnyside Amusement Park was demolished in 1955-56 to make way for the new Gardiner Expressway (public domain). 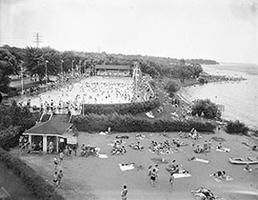 The pool and beachfront at Sunnyside, circa 1940s (courtesy City of Toronto Archives/Fonds 1257, Item 92).
PreviousNext

"The Playground by the Lake"

In its heyday, Sunnyside was Toronto's "playground by the lake." Along with the impressive Bathing Pavilion (with accommodation for 7700 bathers), the area featured the largest outdoor pool in the world (containing 3.4 million litres of water), rides, games of skill, refreshment stands and entertainment that ranged from ballet to dancing bears and trained seals, escape artists and magicians, female impersonators, fireworks, circus acrobats, pole-sitters, high-wire acts, vaudeville performers, ship burnings and community sing-alongs.

In its golden era in the 1920s and 1930s, Sunnyside attracted hundreds of thousands of people to its rides, boardwalk, beaches and events each year from Victoria Day to Labour Day. After the Second World War crowds dropped off, a number of suspicious fires gave rise to safety concerns and the city unveiled plans for a new super highway to service the ever-ascendant culture of the automobile. Most of the amusement park was demolished without ceremony from December 1955 to February 1956, replaced by the new Gardiner Expressway and a reconstructed Lake Shore Boulevard.

The carousel survived, transported to Disneyland in California. The Bathing Pavilion (now called the Gus Ryder Pool for Marilyn Bell's coach) was designated an historic site in 1975, and was restored and rededicated 14 June 1980. In 2006, the Palais Royale re-opened as a dance hall and recalled some of the old glamour of Sunnyside.