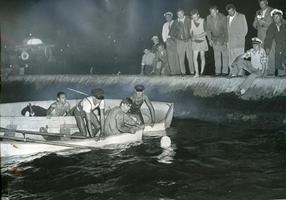 Marilyn Bell completed her swim across Lake Ontario when she touched the breakwaters at Sunnyside Beach near the CNE, September 9, 1954 (courtesy Canada's Sports Hall of Fame/X981.32.1.52). 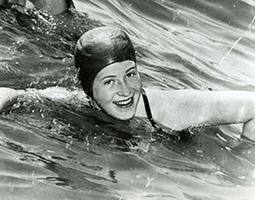 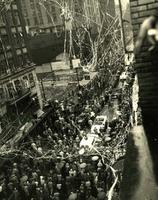 Marilyn Bell waded into the frigid waters of Lake Ontario at Youngstown, NY, at 11:07 p.m. Wednesday, 8 September 1954. It wasn't supposed to be a race, but she made it into one. The Canadian National Exhibition had offered $10 000 to American swimmer Florence Chadwick to swim the lake. Many thought it was unfair not to include Canadians in the event. Only two others took up the challenge, Winnie Roach Leuszler and a 16-year old student, Marilyn Bell.

Marilyn's coach Gus Ryder was in a boat ahead of her. It was dark and no one knew where the other two swimmers were. No one ashore on the other side had any idea of the drama that was to unfold as Marilyn battled 4-m waves, lamprey eels, exhaustion and numbness. Ryder shouted encouragement and fed his swimmer corn syrup from a cup.

At dawn, Marilyn had covered 22 km. She did not know it but she had already eclipsed Chadwick, who had become violently ill in the choppy water. When Marilyn became numb and glassy-eyed at 10:30 a.m. Ryder took out a black board and wrote on it "FLO IS OUT." Soon Leuszler was pulled out as well. Marilyn's best friend Joan Cooke shouted encouragement from the boat and Marilyn started swimming again. Meanwhile, word was spreading not only across Toronto but across all of Canada. A flotilla of media appeared and tens of thousands-- eventually 250 000-- gathered on shore.

At 6:30 in the evening, Marilyn had reached her limit but Ryder ignored her father's wishes to pull her out. He asked Joan to swim beside her friend. Driven west by the current to Sunnyside, Marilyn finally touched the breakwater at 8:06 p.m. Because of the currents she had actually swum 64 km. Pandemonium broke loose as Marilyn came ashore at Budapest Park, the undisputed heroine of all Canada. Proud Canadians showered her with more than $50 000 in prizes and gifts.