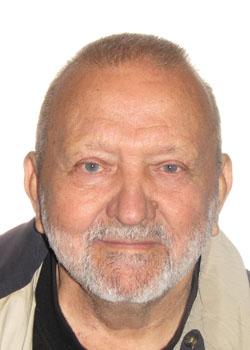 Sven Johansson grew up at Torskog, Bohus län, near Göteborg on Sweden’s Atlantic coast. His upbringing included amateur theatre, music, lively discussion and a large home library. The overwhelming horror of the Second World War clouded his late teens. As a young man he moved to Swedish Lappland to live off the land and contemplate life’s mysteries. A massive hydroelectric project to flood the Upper Luleå River basin, where he lived, was the reason for his 1962 decision to emigrate to the Mackenzie River Delta in the Northwest Territories. The Canadian federal government had given him a contract as part of a reindeer domestication project.

With the Canadian Reindeer Project, the federal government aimed to settle Inuit near Royal Canadian Mounted Police posts in the Northwest Territories. Because caribou herds were dwindling, the government decided to herd thousands of reindeer from Alaska to the Northwest Territories. They hoped the reindeer would provide a new industry and food source for the Inuit. Because of his knowledge of reindeer husbandry, learned from the Sami in northern Sweden, Sven Johansson received a 5-year contract to reorganize this project, which was failing. Keeping the herds in small spaces had resulted in severe malnutrition, a problem solved by Johansson’s introduction of free-range herding.

Afterwards the completion of his contract with the Canadian Reindeer Project, Johansson continued living in the Mackenzie River Delta. He worked with the Geological Survey of Canada on a survey of the Arctic Polar Shelf with North Star, a special vessel built for the Arctic. Beginning in the early 1970s, Johansson lived on his boat in Victoria, BC, leaving only to skipper Belvedere, a 60-foot sailing yacht. The Belvedere was the first private vessel to sail through the Northwest Passage from the Pacific to the Atlantic, arriving in New York in 1989.

Sven Johansson’s entry into artistic dance began in 1989, with incorporation of the non-profit Discovery Dance Society. The non-profit was based on the development of ES Dance (ES stands for Excedere Saltatio, meaning “dance exceeding limitations”). Allowing performers to flout gravity and dance in midair, the ES Dance instrument is a long pole on a wheeled fulcrum run by a trained operator. With proper stage lighting none of the equipment is seen, only the dancer.

Johansson’s innovative technique premiered in 1992 in Victoria with Exalted Surprise. He choreographed his own dance productions as well as theatrical productions that lent themselves to the technique. These productions included Peter Pan, Fiddler on the Roof and Mer Tribu, a 2001 pilot project symbolizing underwater dance. Some of the productions aired on CBC TV and Bravo Canada. In 1994, his Discovery Dance Company pioneered dance for the disabled using the ES Dance instrument, which compensates for blindness, muscular inability and lack of balance.

For his work with the domestic-reindeer herd, on the polar shelf surveys, and on studies in Arctic ethnology and Inuit and Scandinavian Viking migrations, Sven Johansson was invested as a member of the Order of Canada in 1994. In 2002, he was awarded the Queen’s Golden Jubilee Medal.