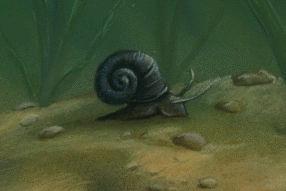 Snail, common name for members of several groups of gastropod molluscs. Snails inhabit all moist habitats, but most forms are marine. Typically, snails possess a protective spiral shell secreted by the mantle, a muscular foot for locomotion, a definable head region, housing both sensory structures, and a rasping ribbon of minute, chitinous teeth (the radula) for feeding. Gills are present in most snails (orders Prosobranchia and Opisthobranchia), but in the lung-breathing forms (Pulmonata) the mantle cavity forms the respiratory exchange surface. The common terrestrial snail (genus Helix) is edible. When prepared with seasoned garlic butter, this pulmonate is more familiar as the escargot of French cuisine. Other edible snails include the abalone and the conch. Freshwater snails are especially abundant in the Great Lakes region; in the temperature extremes of the more northern latitudes, species' numbers are reduced. Gastropod feeding processes range from filter feeding and grazing to predation on organisms much larger than themselves (eg, sea slugs feed upon coelenterate anemones). The sexes are often separate, but snails such as the slipper limpet (genus Crepidula) may change from male to male-female to female in the course of a lifetime.