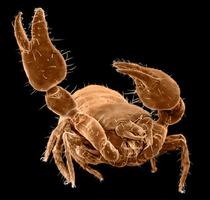 Predatory small arthropods, pseudoscorpions are poisonous, but in their front claws, not their tails (photo by Klaus Bolte). 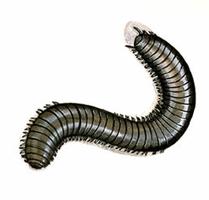 The millipede typically has 2 pairs of legs per body segment (artwork by Jan Sovak, 1989). 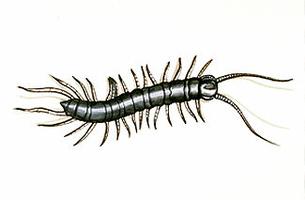 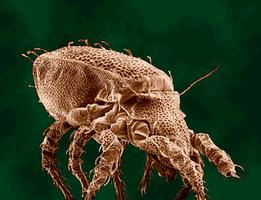 Arthropoda, phylum of bilaterally symmetrical animals having external skeletons (exoskeletons), multisegmented bodies and paired, jointed appendages. Including spiders, mites, crustaceans, centipedes and insects, they are practically ubiquitous and comprise 75% of known animal species (over 923 000 species worldwide; over 33 670 in Canada).

Arthropods are distinguished by a cuticular exoskeleton, secreted by an underlying layer of epidermal cells. The exoskeleton consists of protein and chitin (a substance similar to cellulose) and has 2 layers: an outer epicuticle, often containing wax which reduces water loss, and an inner procuticle. The exoskeleton consists of plates (sclerites) and cylinders of hard cuticle linked by flexible regions (articular membranes). In sclerites the outer procuticle is hard exocuticle; the remainder is softer endocuticle.

Since exocuticle is absent from joints, arthropods can move appendages and flex one body segment on another. Movement results from contraction and relaxation of striated muscle fibres. Most arthropods use their appendages for movement, for example, as paddles in aquatic species or as legs in terrestrial ones.

Young arthropods grow by periodically shedding and replacing their exoskeleton (molting), a process controlled by hormones (principally ecdysterone). The body cavity is filled with blood, and a weakly developed heart moves the blood through 1 or more arteries. Arthropod blood is usually colourless because it lacks the respiratory pigments of vertebrate blood. Aquatic arthropods breathe using gills borne on appendages or body segments; terrestrial forms, by book lungs (membranes arranged like leaves of a book) or tracheal tubes.

Arthropods feed on living or dead organic matter or may parasitize other animals. The structure of gut and mouth parts varies with diet. Organs of excretion are gills, antennal glands, coxal glands or Malpighian tubules.

Most arthropods have separate sexes. Sperm are usually passed to the female in a sealed package (spermatophore); the process is often preceded by elaborate behaviour. Newly hatched juveniles are smaller than and often differ from parents in form, food and habit. Such juveniles become adults through hormone-controlled metamorphosis.

Small, terrestrial forms must occupy humid microhabitats to avoid drying out. Because the power of muscle fibres is proportional to their cross-sectional area, large arthropods are relatively weaker. Large forms are too heavy and weak to move quickly and also have trouble breathing, since gas exchange is mostly by simple diffusion. Therefore, size and habitat are somewhat restricted among terrestrial forms. Being supported by water, marine arthropods can be very large (body length up to 60 cm).

Arthropods probably evolved in Precambrian seas over 570 million years ago from the same ancestor or ancestors as polychaete annelida (worms with many hairlike appendages). The oldest known fossils (lower Cambrian, 544-520 million years old) are diverse and many belong to groups still in existence. These facts suggest that splitting of lineages occurred much earlier. It is uncertain whether arthropods evolved from a common ancestor or from several, unrelated ancestors. Arthropods are classified into 4 subphyla, described below.

Chelicerates are the only arthropods lacking antennae. The body consists of cephalothorax (fused head and thorax) and opisthosoma (abdomen), and bears a pair of pincerlike feeding appendages, a pair of pedipalps and 4 pairs of walking legs. The group includes horseshoe crabs, sea spiders and arachnids (spiders, ticks, mites, scorpions), with over 64 550 species described (3225 in Canada).

Crustaceans, with over 31 300 known species, are mainly marine with some fresh water and terrestrial forms. The head bears 2 pairs of antennae, a pair of stalked or unstalked compound eyes, 2 mandibles and 2 pairs of maxillae. Segmentation and appendages of thorax and abdomen vary with species and lifestyle. Appendages are biramous (2-branched) and adapted for filter feeding, respiration, swimming, burrowing, brooding young and mating. The subphylum includes water fleas, copepods, barnacles, crabs, lobsters, crayfish, shrimps, etc.

Subphylum includes the myriapods (centipedes, millipedes, symphylans and pauropods) and insects. About 760 000 species are known (some 30 580 in Canada) - the vast majority being insects. Some scientists link uniramians with crustaceans in the subphylum Mandibulata because of similar head structure. Most uniramians possess a pair of antennae and mandibles, and 1 or 2 pairs of maxillae (often fused on the midline). Insects have 3 pairs of unbranched legs; myriapods have more. Most adult insects have 1 or 2 pairs of wings. Body segments are grouped into compound body sections (2 for myriapods, 3 for insects).

Three other phyla are frequently considered with arthropods because of similar structure. Onychophorans comprise 70 known species of terrestrial, caterpillarlike animals of the tropics and southern hemisphere. The body is soft, covered with flexible cuticle and adapted for squeezing into confined spaces.

Onychophorans possess a pair of antennae, a pair of clawlike mandibles, many pairs of ventral, unjointed limbs and internal organs having both annelid and arthropod characteristics.

Tardigrades (water bears) are small (0.3-1.2 mm), 8-legged animals that live in the water film on moss, in soil or in fresh or salt water, and feed on plant cells, detritus or other animals. They share characteristics with both gastrotrichs (phylum of aquatic, somewhat wormlike organisms) and arthropods. About 400 species are known (48 in Canada).

Pentastomids comprise about 90 species (2 in Canada) of highly specialized tongue worms which infest lungs of vertebrates, mostly reptiles. It has been suggested that they have arachnid, myriapod or crustacean affinities. 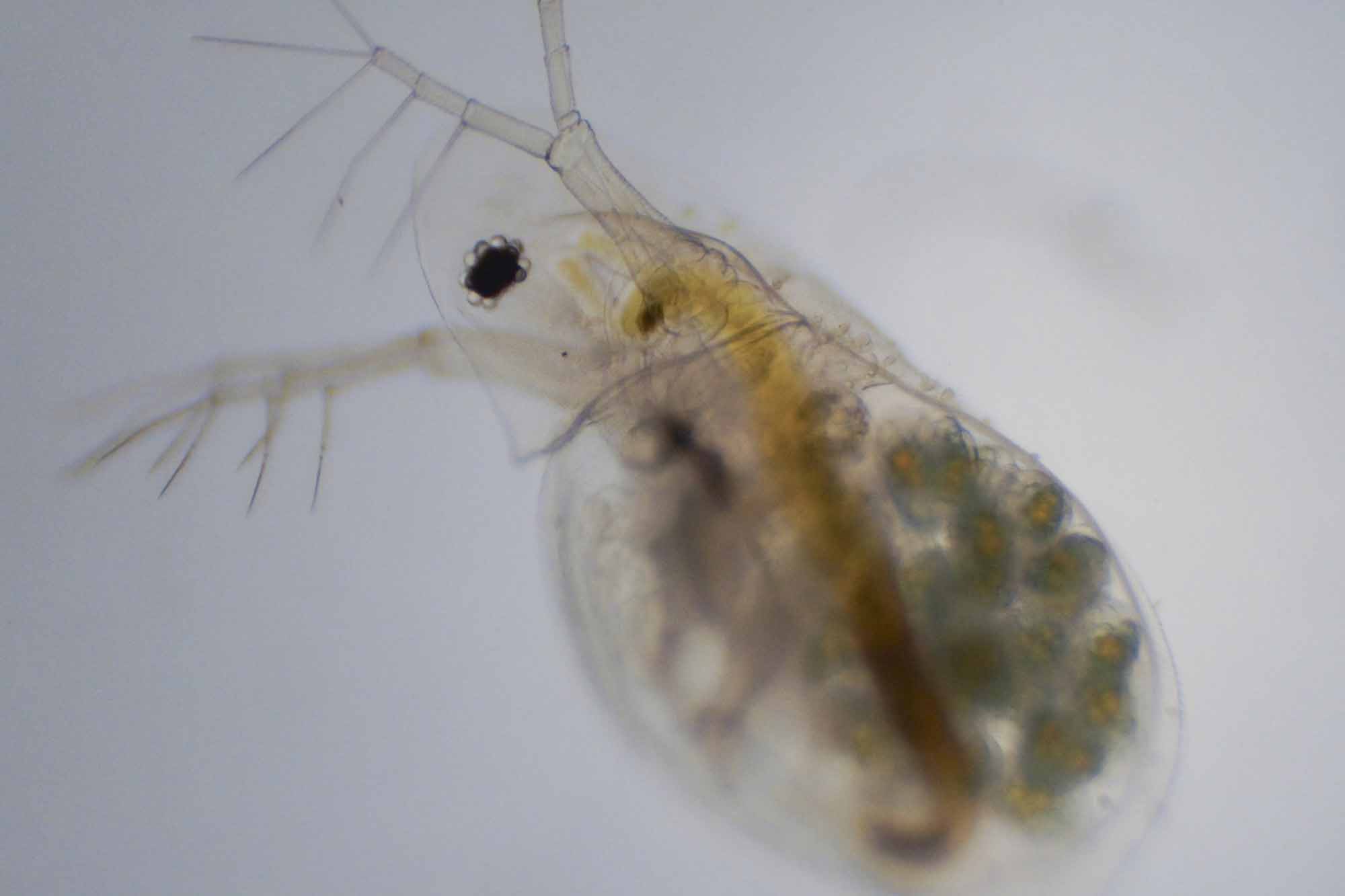