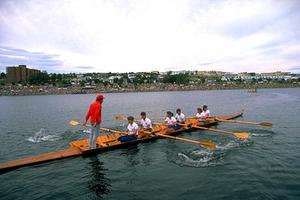 Royal St John's Regatta, believed to be the oldest continuing sporting event in North America, is a series of ROWING races over a 2.45 km course in long, fixed-seat shells carrying 6 oarsmen. The regatta originated in sailing and rowing races in St John's harbour in the early 19th century, but the first recorded race took place 12 August 1816 on Quidi Vidi Lake, which lies just north of the harbour and Signal Hill. The first official, organized regatta was held on 22 September 1818.

After a suspension during World War I, the regatta resumed in 1919 and has continued since then. A lively carnival is held during the regatta, often overshadowing the rowing. Regatta Day is a statutory holiday for the city of ST JOHN'S under provincial legislation and the first Wednesday of August is set aside for it. The regatta's organizing committee has the authority to determine if conditions are right for the races. If inclement weather prevents it from being held on the Wednesday, the races are postponed to the following day. In 1993 it received its title as the "Royal St John's Regatta.