Paulatuk, NWT, incorporated as a hamlet in 1987, population 313 (2011c), 294 (2006c). The Hamlet of Paulatuk dates back to the early 1920s when a number of INUIT decided to settle at this site on Darnley Bay. At the time the community was called Letty Harbour. The name Paulatuk means "place of coal" or "soot of coal" in Inuvialuktun and refers to the coal early settlers found nearby and used for heating. 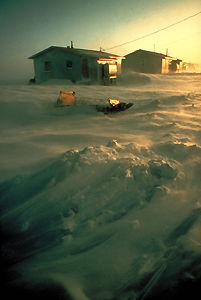 Paulatuk on Darnley Bay is the only permanent settlement in the area of the Horton Plain, NWT (photo by K.H. Raach/Govt of the NWT).\n

In 1935 the Roman Catholic mission opened a trading post at Paulatuk, and in the 1950s a DEW-Line site was built in the community. The DEW-Line base provided new jobs and a shift to wage labour in the community, though traditional occupations like hunting, fishing and trapping remain the mainstays of the local economy. Residents of Paulatuk are also known for their skill in traditional handicrafts and carving. In recent years oil and natural gas exploration on the BEAUFORT SEA has also offered new economic opportunities for the community. TUKTUT NOGAIT NATIONAL PARK, 40 km to the east of the hamlet, was established through the efforts of the residents of Paulatuk.