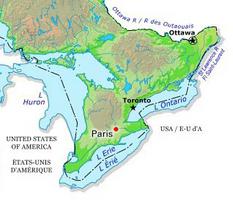 Paris, Ont, urban area, population 11 763 (2011c), 11 177 (2006c). Paris was incorporated as a town in 1855 but in 1999 became part of the new municipality the County of Brant. Paris is located 50 km west of HAMILTON at the confluence of the Nith and Grand rivers. In 1829 an American developer named Hiram Capron founded on this site a settlement he called Forks of the Grand. The site was chosen in order to develop the local gypsum deposits, which are used to develop plaster of Paris, and this product is the source of the former town's name.

Paris is the centre of a farming and dairy district, but its industrial sector, principally poultry processing and mail order with some manufacturing, now makes up a majority of its employment. Penmarvian, a house built by John Penman, a textile manufacturer, remains a landmark. A downtown building marks the site where in 1876 Alexander Graham BELL received from BRANTFORD the first long-distance telephone call.