Mumilaaq Qaqqaq, Inuk Member of Parliament (born 4 November 1993 in Baker Lake, NU). In 2019, Qaqqaq became, at age 25, Nunavut’s youngest MP in history, and the first from the New Democratic Party (NDP) since Nunavut became a territory in 1999. Before entering politics, Qaqqaq was a public speaker and activist who raised awareness of the various crises that Inuit face (suicide, food insecurity, housing, climate).

Mumilaaq Qaqqaq, Inuk Member of Parliament (born 4 November 1993 in Baker Lake, NU). In 2019, Qaqqaq became, at age 25, Nunavut’s youngest MP in history, and the first from the New Democratic Party (NDP) since Nunavut became a territory in 1999. Before entering politics, Qaqqaq was a public speaker and activist who raised awareness of the various crises that Inuit face (suicide, food insecurity, housing, climate). 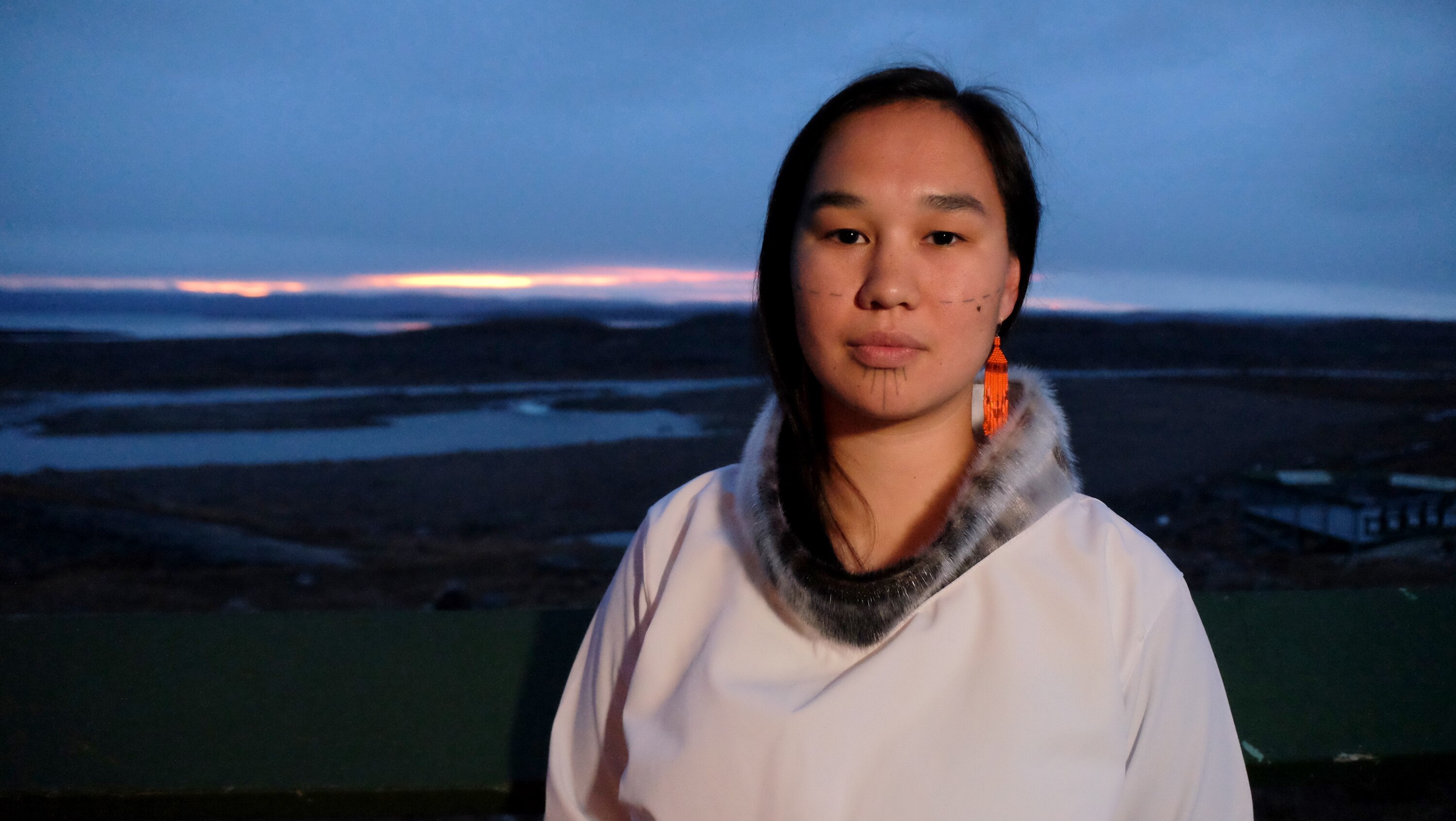 Mumilaaq (previously known as Trina) Qaqqaq spent her childhood in Baker Lake (Qamani’tuaq), Nunavut. Growing up, she benefited from many great opportunities to learn from work, sports and travel.

In 2012, for instance, she participated in the Arctic Winter Games in Whitehorse in ice hockey, a sport she played for 10 years.

In 2012, Qaqqaq also took part in a Northern Youth Abroad (NYA) project in Shakawe (in Botswana, Africa), where she helped rebuild a burned-out daycare and assisted children living with HIV/AIDS. She continued her involvement with NYA by becoming a group leader and facilitator for other youth engaging in its programs.

After graduating from high school in 2011, Qaqqaq moved to Ontario, where she studied Business Administration at Algonquin College in Ottawa. In 2016, she enrolled in the Business Administration program (specializing in Human Resources Management) at Sir Sandford Fleming College, Peterborough, obtaining her diploma in 2019. She was also an Aboriginal Student Representative at the college.

Before entering politics, Qaqqaq was an Inuit Employment Plan administrator intern at Qulliq Energy Corporation. She moved on to be an intern at the Arctic Rose Foundation, a human resources assistant at Inuit Tapiriit Kanatami (ITK) in Ottawa, a Wellness Program specialist for the Government of Nunavut Health Department in Iqaluit, and an Inuit Employment office employee at Nunavut Tunngavik Incorporated (NTI) in Iqaluit. In summer 2019, she took a leave of absence from this position when she accepted the New Democratic Party’s offer to be their candidate for Nunavut in the upcoming federal election.

Qaqqaq has been living in Iqaluit, Nunavut, since 2017.

In 2017, Mumilaaq Qaqqaq participated in Daughters of the Vote, an event on International Women’s Day that brings young women from every federal riding in Canada to the House of Commons to speak about their visions for their country and community. This experience triggered her activism. Qaqqaq was Nunavut’s sole representative among the 338 women. By joining this initiative, Qaqqaq was hoping to improve her ability to help Indigenous peoples create a better future for themselves and Canada, as well as to share her knowledge of the problems facing the people of Nunavut.

In the 2017 speech, the 23-year-old Qaqqaq expressed the pain everyone in Nunavut feels facing the territory’s shockingly high rate of suicide, nearly nine times the national average. She also described the inequality of opportunities for Indigenous peoples in Nunavut, like poverty, housing and health problems:

As an Inuk growing up in Nunavut, suicide is no stranger to myself and those in my territory. We all know it way too well. We are put into and now live in foreign systems that do not work for us… We need support and allies to assist us, work with us, and, most importantly, to listen to us. We cannot face this problem alone like we have been for so long… All we are asking for is our basic human rights. Where is the support from leaders with power and ability to make change? Where are our non-Indigenous allies?

In a CBC interview after the speech, Qaqqaq challenged Canada for its treatment of Indigenous peoples: “Canada as a whole is put on this glorious platform about how we’re such a great country and so diverse and so inclusive, but when you look at Indigenous peoples and their communities and their histories and culture, how much do other people really know?”

On social media, the video of her speech gained national attention. Not long after, Qaqqaq initiated the online project Tuhaanga (“hear me”) to educate, share stories of life in the North, and provide information on how individuals can assist Nunavut.

In February 2018, Qaqqaq attended a rally in Iqaluit to end the injustice faced by Indigenous peoples. Her motivation for participating was to show that Indigenous and non-Indigenous peoples need to stand together in support of reconciliation.

Mumilaaq Qaqqaq had no experience in politics before accepting the New Democratic Party's nomination to run for Nunavut's seat in the House of Commons. She accepted in order to advocate for Nunavut and for Inuit. For Qaqqaq, the status quo is not an option. She criticized past and current federal governments for ignoring Nunavut. In her opinion, it was time for a different party to represent the people of Nunavut in Ottawa.

On 21 October 2019, 25-year-old Qaqqaq became Nunavut’s youngest Member of Parliament (MP) and the first MP in Canadian history to wear traditional Inuit facial tattoos. She was elected with 41.2 per cent of the vote to represent the territory with the youngest population in Canada (25.1 is the median age as per the 2016 Census). Qaqqaq defeated Liberal candidate Megan Pizzo Lyall (31 per cent) and Conservative candidate Leona Aglukkaq (25.8 per cent). After the election, Qaqqaq thanked her opponents for running “great campaigns.” She also proudly noted the Inuit backgrounds of Lyall and Aglukkaq: “It was an honour to run for this seat against two strong Inuit women.” Her win has enabled the New Democratic Party to hold the Nunavut seat in the House of Commons for the very first time since Nunavut became a territory in 1999.

On 20 May 2021, Qaqqaq announced that she would not seek re-election as MP for Nunavut. In her statement on social media, she said:

I’m incredibly thankful for this opportunity to be able to bring a voice to the House of Commons that speaks truth and reality. And, just because I have decided that this institution is not the place for me right now, all Inuit, youth and Nunavummiut should know that change is possible and our voices matter. You can do anything you set your mind to, and if you have room in your life to try to help others, please do so.