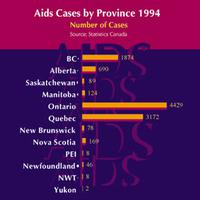 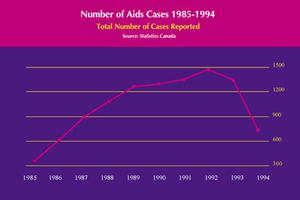 AIDS (Acquired Immune Deficiency Syndrome) is a fatal disease caused by infection by a virus that damages the immune system, resulting in loss of protection against many infectious diseases and some cancers. This retrovirus is termed human immunodeficiency virus or HIV (formerly known as T-lymphotrophic virus type III, lymphadenopathy-associated virus, or AIDS-related virus). It infects only humans and chimpanzees, and this has severely limited its study. Target cells that this virus infects are T-lymphocytes (which it can kill) and macrophages. Destruction of these T-lymphocytes and macrophages produces the AIDS immunodeficiency.

Illnesses that this infection can produce include a transient disease, developing within several months of exposure. It is characterized by rash, fever, malaise, joint pains and lymphadenopathy (swollen lymph nodes). A later illness, termed AIDS-related complex (ARC), is characterized by malaise, fevers, night sweats, weight loss, diarrhea and sometimes fungal infection of the pharynx (thrush). ARC occurs in over 25% of infected persons and is associated with some damage to the immune system. Profound immune system damage is a late manifestation of this infection.

Up to 10 years may elapse before profound immune system damage develops, but it may develop in more than 50% of infected persons before this immunodeficiency develops, and more than 20% of infected persons may develop this. The opportunistic infections of unusual malignancies that result from this immunodeficiency define this as AIDS. Pneumocystis carinii pneumonia occurs in over 50% of persons with AIDS; a cancer, Kaposi's sarcoma, occurs in approximately 20%; among other illnesses are infections by Toxoplasma gondii, Cryptosporidium, Mycobacterium avium-intracellulare and rare lymphomas. Retrovirus infection of the brain also occurs. This is a slowly progressive infection, possibly of macrophage-type cells in the brain. It is poorly characterized but manifestations include subacute encephalitis, dementia and a variety of neurological illnesses.

The virus is transmitted via direct inoculation into the body through injection of blood or blood products or transplantation of tissues; through sexual activity with an infected person or by artificial insemination; or through pregnancy to infants of infected mothers. Transmission has not been documented by other potential ways of spread, such as aerosolization, insect bites or nonsexual contact. Infection has been documented worldwide with major sites in the US, Haiti and central Africa. Epidemiology of this infection differs between industrialized and less developed areas. In North America, Europe and Australia, men are the major group infected, most of whom have engaged in homosexual activity; in Africa equal proportions of men and women have been infected. Transmission in Africa and Haiti remains unexplained, but may reflect heterosexual activity with an infected person. One theory, supported by research, is that HIV is a zoonosis, a disease that can be transmitted from animals to humans, and that it may have arisen among humans in central West Africa who eat chimpanzee meat. SIV (simian immunodeficiency virus) appears to have existed fairly harmlessly in chimps for centuries but is potentially deadly when consumed by humans and leads to HIV. Eating chimpanzee meat is a practice that is difficult to curtail, given that the bush meat trade is a large commercial enterprise.

Some 70% to 90% of infected persons develop serum antibodies to this virus. These antibodies are used to identify potentially infectious blood donations and to determine if someone has been infected. The virus can be cultured from blood, tissues and body fluids, and can be recovered from most persons who have antibodies, whether or not they are ill. So anyone who is likely to have become infected is considered potentially infectious, whether or not they have antibodies or are ill. This includes anyone who has engaged in homosexual activity since 1978; has had sexual activity with someone who is infected, or likely to be infected; has abused drugs intravenously; or has come from an area where this infection is considered endemic (eg, central Africa). Anyone who could be infected should ensure that their body fluids do not enter another person's body. This means that they must not donate blood, or sperm for artificial insemination; should use condoms during sexual activity and avoid exchange of saliva; and should not share needles or syringes if they inject drugs.

What determines the outcome following infection is unknown. Whether or not an infected person will develop the disease, or what diseases may result, cannot now be predicted. Also, there is no way to cure the infected person or to limit the damage this infection may produce, or to repair the damaged immune system once this occurs. Meanwhile, therapy is directed at treating opportunistic infections or malignancies that result from this immunodeficiency. Intensive research is directed at developing a vaccine that would protect people from becoming infected, and at antiviral drugs that would stop the infection once this has occurred.

AIDS is costly; control is directed at prevention. Intensive efforts are underway to educate the public about how infection can be prevented, and all blood donations are now screened to prevent transmission by blood or blood products. Community-based support groups, hospices and hospital programs are also being developed so that care is available to anyone who is infected or who has AIDS. Researchers have reported evidence of significant gains in the treatment of AIDS. In June 1997 the US Centers for Disease Control reported a 19% reduction in deaths from AIDS, the first since the outbreak of the epidemic, due to the introduction of highly active antiretroviral therapy (HAART). These medical advances have steadily lowered the AIDS mortality rates in Canada as well, from 1 500 deaths in 1995 to only 60 in 2004.