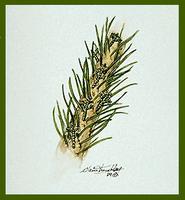 A. pusillum is an eastern species which parasitizes spruce (artwork by Claire Tremblay).

Mistletoe family, Loranthaceae, includes about 30 genera and over 1000 species. It is predominantly tropical but has members in temperate regions. Plants are mostly small shrubs, parasitic on gymnosperms and woody flowering plants. They are attached to hosts, drawing nutrients from them through modified roots (haustoria). Severe infestations may produce abnormal growth of branches, called "witches' brooms." Flowers are small, usually greenish and, in North American species, unisexual. Fruits, fleshy berries with shelled seeds, are eaten by birds, which wipe the seeds from their beaks onto trees or deposit them in droppings.

The only Canadian genus, Arceuthobium, comprises about 10 species, 4 of which are native to Canada. Three tend to parasitize particular trees: A. americanum, pine; A. douglasii, Douglas fir; A. pusillum, spruce. Only A. campylopodum has several hosts. A. pusillum occurs in the East, the others in the West. Most mistletoes are leafy and often evergreen, but Arceuthobium species have leaves reduced to scales, thus appearing leafless. The genus is unique in the explosive discharge of seeds from fruits.

Some western Indian groups ate boiled berries, and used "leaf tea" for contraception. Some species may be toxic to livestock. Familiar mistletoe, Viscum album, is native to Europe, Africa and Asia. It has long been associated with ancient Celtic religious ceremonies, and its modern use as a Christmas decoration may derive from this.