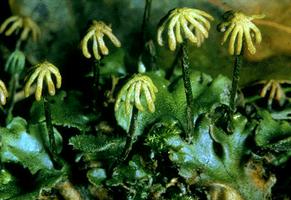 Liverwort, small terrestrial plant belonging, with mosses and hornworts, to division Bryophyta. Bryophytes show alternation of generations, ie, have 2 stages in the life cycle: a free-living, perennial gametophyte (sexual generation) and a short-lived sporophyte (asexual generation) that remains attached to and dependent on the gametophyte. The liverwort gametophyte is either a leafy stem or a thallus, ie, a flat, leafless expanse of cells (resembling the lobes of the liver, hence the name). The horizontally growing gametophytes have rhizoids (structures analogous to roots), which serve to attach them to the surface on which they grow.

Most leafy liverworts have stems with 2 lateral rows of leaves; many species have a third row of reduced leaves on the underside of the stem. Liverwort sporophytes have a foot, embedded into the gametophyte tissues, and a spore capsule, normally raised above the gametophyte by a fragile stalk and persisting for only a day or so. Spores are released when the capsule wall ruptures, generally into 4 sections. Inside the capsules are hygroscopic cells (elaters), which help to disperse the spores. Many liverworts reproduce asexually by gemmae, small groups of cells produced on the thallus or leafy stem. Since they lack any conducting tissues (xylem, phloem), liverworts mainly absorb water directly through leaves, stems or thallus.

The 2 theories of liverwort evolution state that they developed from a primitive group of vascular plants (ie, those having true conducting tissues) or from some green algal ancestor. They belong to a group that lost much evolutionary potential by having the gametophyte generation dominant and by lacking conducting tissues, so that their size is greatly limited (most range from a few millimetres to 20 cm).

Liverworts grow mostly in moist, shady places on rocks, trees, rotten wood, humus or soil. In Canada, they are rarely abundant in ground vegetation except in the temperate rain forests of coastal BC, where they can dominate ground cover and densely clothe branches and tree trunks. Over 7000 species occur worldwide, about 85% having leafy gametophytes.