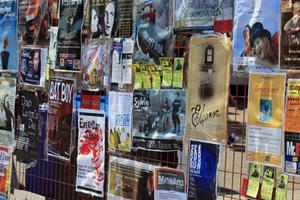 Festival Theatre is a generic name given to theatre companies that present productions to celebrate a particular author or group of authors, a particular genre, or a particular period of time. Most often held in summer months, festival theatres help to create, nationally and internationally, an awareness of a dramatic tradition while promoting TOURISM in a particular region of the country.

The term "festival theatre" emerged in England in the nineteenth century to refer to special theatrical performances mounted to celebrate exceptional authors or dates. The festival held in 1864 at Stratford-Upon-Avon, England, to mark the tercentenary of Shakespeare's birth is an early example. Beginning in 1879 the Shakespeare Festival at Stratford-Upon-Avon became an annual event. In Canada, the term was applied to the Festival of Québec in the 1920s and to the DOMINION DRAMA FESTIVAL (fd 1932), although it was not until after WORLD WAR II that it came into common usage. Before World War II, the term most often used to describe summer theatre was summer stock. Many contemporary Canadian companies - STEPHENVILLE FESTIVAL (fd 1979) and FESTIVAL ANTIGONISH (fd 1988) - continue to mount repertoire of the traditional summer stock companies.

With the growth of summer vacation resorts, summer stock flourished after World War II until the late 1950s. These companies were established by theatre professionals as a business during the summer months and tended to offer an eclectic season of productions that the managers hoped would draw the resident summer audience- light comedies, thrillers, and popular London and New York fare. With the advent of television and better transportation facilities, summer stock lost its audience in the 1960s. By that time, bigger, more permanent festival theatres were emerging. These theatres were community organized, non-profit companies that sought their audience among tourists, especially from the United States.

The Earle Grey Shakespeare Festival (1949-58) and the STRATFORD FESTIVAL (fd 1953) were created to present the works of Shakespeare, although Stratford rapidly expanded its mandate to include the masterpieces of Western drama, Gilbert and Sullivan, and modern classics. Numerous other festivals dedicated to the works of Shakespeare and classical repertoire have sprung up from Halifax (Shakespeare by the Sea, fd 1994) to Saskatoon (Shakespeare on the Saskatchewan, fd 1985) to Vancouver (Bard on the Beach Shakespeare Festival, fd 1990). The SHAW FESTIVAL (fd 1962) focuses on the works of George Bernard Shaw and his contemporaries, and the BLYTH FESTIVAL (fd 1975) concentrates on new Canadian plays and the CHARLOTTETOWN SUMMER FESTIVAL (fd 1965) mounts original Canadian musical productions. Québec can boast of two major biennial international festivals, La Quinzaine internationale de théâtre of Québec City (fd 1984) and the Festival de théâtre des Ameriques in Montréal (fd 1985).

In 1982, Canada's first FRINGE FESTIVAL was established in Edmonton. Modeled on the Edinburgh Fringe Festival, the main purpose was to provide both emerging and established artists with the opportunity to produce plays no matter the content, form or style, and to make the event as affordable and accessible as possible for the community. Since then the movement has grown exponentially, with Canada, the first country in the world to have a fringe circuit, claiming more fringe festivals than any other country. In 2008, there were nearly 2 dozen official fringe festivals (sanctioned by the Canadian Association of Fringe® Festivals) in Canada including Vancouver, Calgary, Saskatoon, Winnipeg, Toronto, Montreal and Halifax. Hundreds of thousands of people see more than 1000 productions each year. The fringe circuit has become a crucial source of new and provocative original Canadian theatre.

As Canadian theatre itself has expanded to reflect multiple constituencies, so too has the range of theatre festivals, each organization contributing to the development, awareness and richness of diversity in Canadian theatre. A few examples include Groundswell (NIGHTWOOD THEATRE), showcasing works-in-progress by women since the late 1990s; Rhubarb! Festival, celebrating new gay and lesbian plays, hosted by BUDDIES IN BAD TIMES THEATRE since 1979; rock.paper.sistahz annual festival, featuring new works, mainly by black women artists; PuSh International Performing Arts Festival, which presents groundbreaking work in the live performing arts of theatre, dance, music and various hybrid forms of performance in Vancouver; and NotaBle Acts Summer Theatre Festival in Fredericton, dedicated to showcasing new works from New Brunswick.