The Canadian Radio Broadcasting Commission, precursor of the CBC, began broadcasting from Montréal in English and French. Depicted is a radio drama from the 1930s (courtesy NAC).

The organized production of radio dramas in Canada began in 1925 when the Canadian National Railways Radio Department began broadcasting plays. The national broadcasting networks-CNR, CRBC and CBC-have been in the forefront of radio-drama production and experimentation and have provided audiences and training for many Canadian theatre professionals.

The radio play shares the usual dramatic qualities of drama on the stage and in films and television, with this primary difference: the absence of the traditional visual resources of drama. Reliance on sound alone to communicate has forced the creators of radio drama to refine the available sound techniques: voice, music, sound effects and the control and mixing of sounds. Canadian radio drama has been in the vanguard of these developments, achieving flexibility in the representation of scenes and scene transitions, original music and depiction of character. 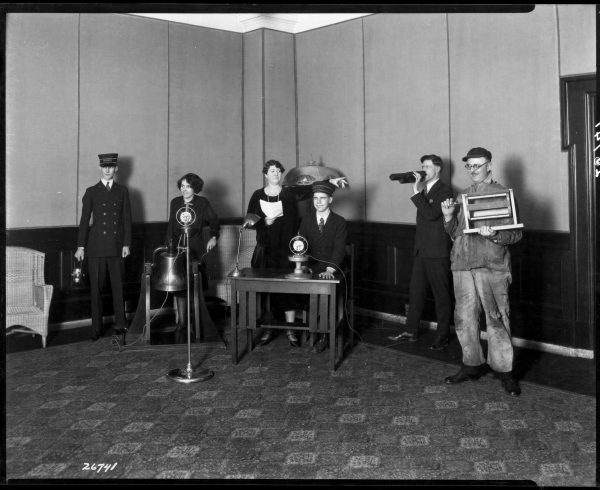 The first regular drama series in Canada was the CNR Drama Department's "CNRV Players," produced from Vancouver by Jack Gillmore (1927-32). The productions included Shakespeare, adaptations from American and European plays and from fiction, and some original Vancouver dramas. The first national series of Canadian radio plays was the "Romance of Canada," 24 plays based on Canadian history, written by Merrill DENISON and produced in 1931-32 in CN Radio's Montréal studios. Tyrone GUTHRIE directed the first 14 plays, and Rupert Caplan and Esmie Moonie produced the second season. Another pioneer radio-drama series, the "CKUA Players," was produced by Sheila Marryat throughout the 1930s from CKUA, the station of the University of Alberta, over a network of western stations.

The CN Radio network was nationalized in 1932 and became the Canadian Radio Broadcasting Commission (see BROADCASTING, RADIO AND TELEVISION). In 3 years, from Nov 1933, the CRBC increased the number of weekly English national-network radio-drama series to 17 under its program director Ernest BUSHNELL. Rupert Caplan's "Radio Theatre Guild" from Montréal was the best-known national drama series, broadcasting original Canadian, American and European plays. Popular too were Don Henshaw's "Forgotten Footsteps" and the serial "Youngbloods of Beaver Bend." In Nov 1936 the CRBC was reorganized as the CANADIAN BROADCASTING CORPORATION. Its first supervisor of drama, Rupert Lucas, continued the development of drama offerings: Shakespeare and the classics, adaptations from fiction, documentaries and original radio plays. He established regional weekly drama series in Winnipeg, Toronto, Montréal and Vancouver. With the beginning of World War II the CBC Drama Department series became important instruments of war education and propaganda, and the project of centralizing prestige radio drama was begun.

With the appointment of Andrew ALLAN in 1943 as national drama supervisor, the golden age of Canadian radio drama began, with productions of original Canadian plays challenging the previous domination of theatre by British and American professionals. In Jan 1944 Allan introduced a new national play-anthology series, the weekly "Stage" series from Toronto. With its balanced mix of ambitious original Canadian plays and the best of the classical and modern American and European dramas, "Stage" attracted large national audiences. It became in effect our national professional theatre, setting the pace for the chain of regional CBC drama series that was completed by the Halifax series in 1947.

This CBC network of major national and regional drama series was the primary showcase for the best of Canadian and world drama, as well as a training ground for many Canadian theatre professionals. Among the well-known writers for the national series were Fletcher Markle, Len Peterson, Joseph SCHULL, Mac Shoub, Lister SINCLAIR, Gerald Noxon, Alan King, Mavor MOORE, Hugh Kemp and W.O. MITCHELL. In the period 1944 to 1961 an estimated 6000 plays were produced in over 100 CBC series across the country; more than half of these plays were Canadian originals.

CBC television, with its own drama series, arrived in 1952, and began to slowly attract audiences away from radio drama (see TELEVISION DRAMA). The growth of the legitimate stage in the 1950s in Canada had a similar effect, especially the STRATFORD FESTIVAL, to which many CBC drama professionals contributed. The pace of CBC Radio's drama production did not slacken, however, until the mid-1960s. The next generation of CBC producers, notably John Reeves and Gerald Newman, began experiments in new drama forms and techniques. "Stage" and "Wednesday Night" (later "Tuesday Night") continued into the mid-1970s, and radio-drama production on the network and from most regions continues to the present, though administration became gradually centralized.

In the 1980s Canada rediscovered "talking radio," the radio of ideas and of drama. The number of national network drama series increased: "Stereo Theatre," "Vanishing Point" and the daily short drama segments on "Morningside" as well as the flagship series of original plays, "Sunday Matinee." One of the major shifts was to more popular programming, to attract wider audiences.

By the early 1990s, all these series had disappeared or made major changes in their 1980s forms. Drama became weekly on "Morningside," consisting, for example, of repeats of the weekly series of detective plays, "The Mystery Project." There was also an hour-long series of anthology plays, "Monday Night Playhouse," on the stereo network (now Radio Two), repeated on the AM network (now Radio One) as "Sunday Showcase." This series included original plays and dramatizations of well-known contemporary novels. By the end of the 1990s this series was being broadcast only monthly.

In parallel with the above more traditional drama, CBC continues to produce popular topical dramatic comedy-satire , some of it in the old tradition of Max Ferguson's "Rawhide" and "Wayne and Shuster," and some in more modern styles. The "Royal Canadian Air Farce" and "Double Exposure" have moved to TV. But regional drama continues to be produced, particularly in Vancouver and on the Prairies, though little of it can be heard on the national network.

A significant phenomenon that began in the mid-1990s is the co-operation of CBC Radio in the area of radio drama with the radio broadcasters of other English-language nations. This co-operation has taken various forms: from the insertion into CBC series of dramas produced by other national broadcasters, and the switching of CBC drama producers and those of other national broadcasters in order to produce radio plays with each other's drama teams and facilities (for broadcast in both countries); to complicated co-productions taped and edited in several countries. The CBC's favourite for such joint ventures has been the Australian Broadcasting Corporation. In the fall of 1999, the CBC's hour-long serious drama series on Sundays and Mondays broadcast a 7-drama sub-series, "Wordplay 2," including plays from broadcasting networks of Australia, Hong Kong, Britain, the US, New Zealand and South Africa, as well as a CBC production. The effect of these co-operative ventures is to widen the horizons for both Canadian drama producers and Canadian audiences. Nevertheless, the popularizing tendencies in CBC radio drama that began in the 1980s did not abate in the 1990s. Thus experimental radio drama, such as that currently being created in the Acoustic Art Studio of the WDR network in Germany and elsewhere (with techniques inspired by Glenn GOULD's drama-music-documentaries broadcast by CBC at the turn of the 1970s), has not found a place in CBC radio-drama schedules to the present.

More of the estimated 7000 original Canadian radio plays are now available in published form. The official script archives of CBC radio drama are at the Centre for Broadcasting Studies, Concordia University, Montréal. Surviving sound versions are at the National Archives of Canada, Ottawa; the Glenbow Archives, Calgary and at provincial and university archives across the country; the CBC Radio Program archives makes more recent recordings available. See also RADIO PROGRAMMING. 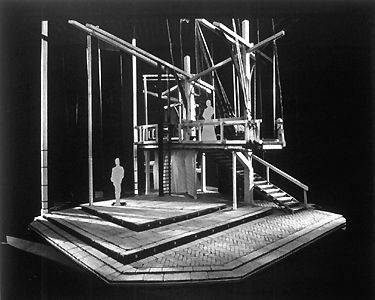