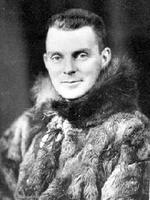 Dickins dramatized the value of the bush plane, flying vast distances across northern Canada. He was operations manager of Ferry Command in WWII (courtesy Public Archives of Manitoba/1494).

Ferry Command was established early in WWII to improve aircraft deliveries to Britain from US factories, since surface shipping was too slow and the ships themselves were needed for other cargoes. Against the British Air Ministry's advice, Lord Beaverbrook (Maxwell AITKEN), the Canadian-born minister of aircraft production, asked Sir Edward BEATTY of the CPR to assemble an organization to fly new multiengined aircraft across the Atlantic. A handful of experienced transatlantic flyers from British Overseas Airways Corporation worked with servicemen and civilians of virtually every Allied nation from headquarters in Montréal. At the time, transatlantic flight was in its infancy, yet knowledgeable observers, believing such a scheme to be impossible, were proved wrong. The CP Air Services Department, established in July 1940, and its successors, the Royal Air Force Ferry Command and No 45 Group of RAF Transport Command, eventually delivered more than 9000 warplanes - losing only about 100 - and paved the way for mass postwar transatlantic air travel.