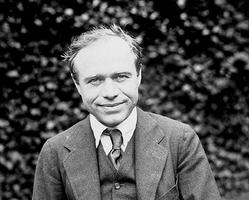 William Maxwell Aitken, 1st Baron Beaverbrook, financier, politician, author, publisher (b at Maple, Ont 25 May 1879; d at Cherkley, Mickleham, Eng 9 June 1964). The son of a Presbyterian minister, Beaverbrook later claimed that his religion lay at the root of his worldly success. In 1880 his family moved to Newcastle, NB. A clever if mischievous boy, "Max" displayed a passion for money-making. He dabbled in journalism and sold insurance before becoming a clerk in a Chatham, NB, law office. There he began his lifelong friendships with R.B. Bennet and James Dunn.

In 1900 he began selling bonds, particularly those of expanding industries and Canadian-based utilities. He joined the Royal Securities Corp as manager in and within 5 years was a millionaire. He moved to Montréal and concentrated on promoting new companies and merging old ones, his most notable creations being Stelco and Canada Cement.

In 1910 he moved to London, Eng, where he pursued his business interests and entered politics. Guided by Andrew Bonar Law, Aitken won a seat for the Conservatives in the second general election of 1910. He championed tariffs and imperial unity and was knighted in 1911. During WWI he represented the Canadian government at the front and wrote Canada in Flanders. His aptitude for political tactics was revealed by his part in Lloyd George's accession as PM. In 1917 he was made a peer, taking the title Beaverbrook after a stream near his Canadian home. He became minister of information in 1918.

After the war, Beaverbrook left politics and established a chain of British newspapers. He bought the Daily Express and the Evening Standard and created the Sunday Express. He also wrote books on his wartime experiences. In 1929 he spearheaded the Empire Free Trade movement, though the idea found little support in the protectionist climate of the 1930s.

As minister of aircraft production in Churchill's wartime government, Beaverbrook galvanized the aircraft industry. Other wartime appointments followed, but despite his bullish determination Beaverbrook lacked the temperament for lasting political success and left politics in 1945. After the war, he supervised his newspapers and wrote memoirs and biographies of his influential friends.