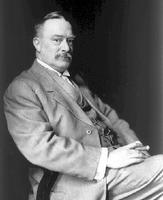 Robert Chambers Edwards, "Bob," newspaper publisher (b at Edinburgh, Scot 12 Sept 1864; d at Calgary 14 Nov 1922). Related to the Chambers publishing family, he immigrated to western Canada in 1894; in 1897 he launched the Wetaskiwin Free Lance, forerunner of the Calgary Eye Opener, an itinerant newspaper first published in High River in 1902 that gained a reputation for originality and wit. Lampooning society and political personalities, the Eye Opener was the target of legal actions that included one on behalf of Premier A.L. Sifton. The Eye Opener called the 3 biggest liars in Alberta "Robert Edwards, Gentleman; Honourable A.L. Sifton (premier); and Bob Edwards, Editor of the Eye Opener." The suit was dropped when Edwards filed a similar action on behalf of Robert Edwards, Gentleman, and Bob Edwards, Editor.

An alcoholic, usually in debt, Edwards moved to Toronto in 1909, then to Montréal, Port Arthur, Ont, and Winnipeg, returning to Calgary in 1911. Unconventional to the end, he supported Prohibition in the referendum of 1916, then won election as an independent in the 1921 provincial elections. He was able to attend only one sitting before his death. His reputation was such that police in dress uniform were his pallbearers, and today his status as a maverick publisher has become a western legend.