Andrew Scheer was born on 20 May 1979, the second child of Mary Scheer, a pediatric nurse, and James (Jim) Scheer, a librarian at the Ottawa Citizen newspaper and a deacon in the Archdiocese of Ottawa. Andrew was one of three children, including sisters Catherine and Anne Marie.

When he was nine, Scheer got a job as a newspaper delivery boy, which he later said helped spark his interest in politics and current affairs. He said he remembers being out on his paper route the day after Christmas, 1989, and seeing a cover photo of Romanian dictator Nicolae Ceausescu, killed by his own soldiers. The story triggered lengthy discussions in Scheer’s family about the incident and whether such a thing could unfold in Canada.

Scheer attended high school at Immaculata, an Ottawa Catholic school where he was enrolled in the French immersion program. As a teenager, he also worked at the concession stands at Ottawa sporting events, and as a waiter at a local restaurant.

Andrew Scheer’s first formal encounter with politics came during high school; as part of a class on online coding, he looked up the Reform Party’s website. Intrigued, he contacted the party and became involved with the 1999 United Alternative convention, a gathering of conservatives seeking to knit together a new, united, right-wing party. The result was the formation of the Canadian Alliance.

By this time, Scheer was at the University of Ottawa, studying history and political science. He was also the head of the Canadian Alliance campus club, and helped  Preston Manning in his campaign for the leadership of the party. Manning lost to Stockwell Day, who, as leader of the Opposition in the House of Commons, hired Scheer to work in the correspondence unit of the Opposition leader’s office.

In Ottawa, Scheer met Jill Ryan from Regina. Scheer moved to Saskatchewan to continue his studies at the University of Regina. Scheer and Ryan married in 2003. They have five children.

The House of Commons of the Canadian Parliament in Ottawa.

Andrew Scheer worked in the insurance business in 2003 but left to join the constituency office of Canadian Alliance MP Larry Spencer. By 2004, the Alliance had merged with the Progressive Conservatives to form the Conservative Party of Canada. Its new leader was Stephen Harper. Scheer decided to try and get elected as an MP.

He beat a former Canadian Football League lineman for the Conservative nomination in the riding of Regina-Qu’Appelle. However, he was considered a long shot in the federal election against New Democrat Lorne Nystrom; he had held the riding or parts of it for 32 years. On 28 June 2004, the 25-year-old Scheer won the seat by just 861 votes. He was one of 99 Conservatives from across Canada sent to Ottawa that year as part of the Official Opposition.

Andrew Scheer made his first speech in Parliament in response to the Liberal government’s  Throne Speech. He laid out some of his philosophy on the role of the government itself. “I believe there are certain natural limits to the scope of government, that some problems need to be addressed by individual Canadians or communities or grassroots organizations,” he said. “We need a government that recognizes its own limits.”

Scheer was an outspoken opponent of the legalization of same-sex marriage in 2005. During contentious debates on the pending bill — which he voted against — he argued that since same-sex couples could not procreate naturally, they cannot be married. He also said that as a Catholic, he “abhorred” the fact that priests were being told they couldn’t talk about their opposition to same-sex marriage.

Despite his views, at the 2015 Conservative Party policy convention, Scheer was among those who said it was time to remove language from the party’s policy handbook opposing same sex marriage. They argued it was time for policy to better reflect the values of Canadian society.

Andrew Scheer was re-elected in 2006. With the Conservatives forming a minority government, he became Assistant Deputy Speaker of the House of Commons. He became Deputy Speaker after the 2008 election. He was attracted to the job, he said, because he had watched how the Liberals used the process and procedures of the House of Commons to their advantage, during their years of minority government.

Re-elected again in 2011 as part of a Conservative majority government, Scheer beat out seven other MPs in the House of Commons election for Speaker. At 32, he was the youngest person ever to hold the post. One of his most important decisions as Speaker came two years later, when he ruled that MPs should be free to deliver statements in the House or ask questions without being on a party list — a practice that had become common under the increasing control exerted by party leaders and party whips. 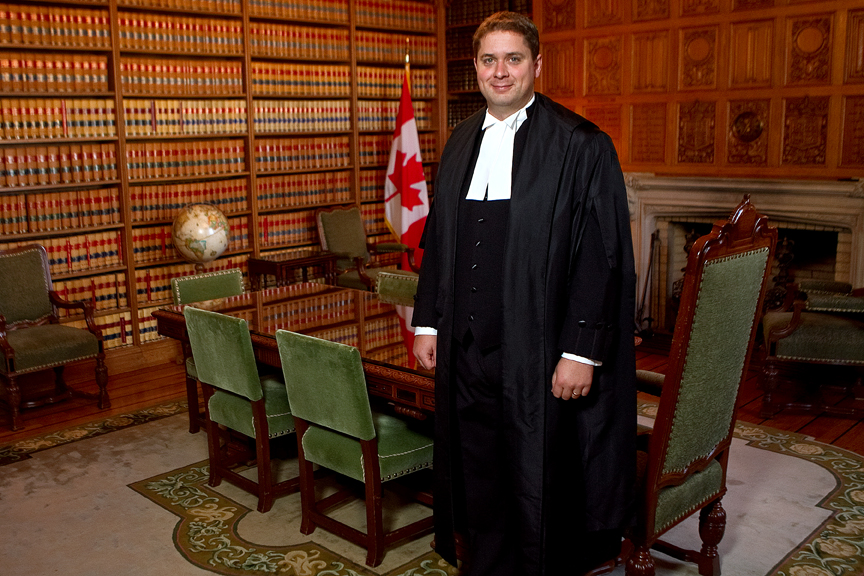 Andrew Scheer served as Speaker of the House of Commons from 2011 to 2015.

In 2015, Andrew Scheer was re-elected again as MP. However, the Conservatives lost power to the Liberals, ending his term as Speaker. With the resignation of Stephen Harper as Conservative leader, Scheer considered seeking the interim leadership of the party. He was encouraged by friends to pursue the permanent job instead. In the meantime, he was appointed Opposition house leader by the resulting interim leader, Rona Ambrose.

Scheer’s name began circulating publicly as a potential leadership candidate in the spring of 2016. In the fall, he resigned as house leader to officially pursue the leadership.

Scheer quickly gained the support of several Conservative caucus members. His campaign remained stuck in third place until celebrity businessman Kevin O’Leary dropped out of the race in April 2017. O’Leary was presumed to have been in second-place behind  Quebec MP Maxime Bernier, the apparent front-runner in the contest. O’Leary’s departure gave Scheer an opening. Among other things, Scheer made a concerted play for support among farmers in Quebec. They were opposed to Bernier’s stance on abolishing supply management in the dairy industry, a policy many considered crucial to the survival of their industry.

Scheer also had the support of many social conservatives. However, some suggested he should not be supported because of his refusal to reopen debates on issues like abortion or   same-sex marriage — despite his personal opposition to both of them. His policy platform also included a pledge to remove federal taxes on home heating; rescind federal funding for universities that did not guarantee free speech on campus; and provide tax credits for parents who homeschool their children or send them to private school.

Scheer drew frequent comparisons to Stephen Harper. He took no issue with the comparison, saying the problem Conservatives had in the previous election was one of style, not substance. “We just need to do a better job of making our policies resonate with everyday Canadians on a more practical level,” he said.


Votes for the new leader were tallied on 27 May 2017. At the end, Andrew Scheer was declared the winner with nearly 63,000 votes in the final round of counting. Maxime Bernier finished second, with nearly 56,000 votes. It was a narrow victory, with Scheer capturing only 50.95 per cent of the available points under the rules of the balloting system.

As leader, Scheer vowed not to drastically alter the direction of the party from its positions and policies under Harper. This led some pundits to call him “Stephen Harper with a smile.”

Leader of the Official Opposition

As Leader of the Official Opposition, Andrew Scheer was a frequent and harsh critic of Prime Minister Justin Trudeau. Along with Conservative premiers, Scheer protested the introduction of a carbon tax; he vowed to repeal it if the party won the 2019 election. He also disputed the government’s purchase and handling of the Trans Mountain Pipeline expansion project. He criticized the government’s decision to compensate Omar Khadr. Scheer also said he could have done a better job than Prime Minister Trudeau in renegotiating the North American Free Trade Agreement (NAFTA). (See also Canada-United States-Mexico Agreement.)

In 2019, Scheer accused Trudeau of political interference in the SNC-Lavalin affair and called for an inquiry by the Royal Canadian Mounted Police. Trudeau threatened to sue Scheer for defamation. Scheer encouraged him to do so, saying he stood by his comments.

Andrew Sheer was repeatedly criticized by the Liberals, and others, for his unwillingness to participate in any LGBTQ pride parades. During the 2019 federal election campaign, he was also criticized for saying that he would not bar Conservative candidates who had made “inappropriate” remarks in the past about LGBTQ or other groups, so long as they had since apologized for doing so. In late August 2019, a video resurfaced of Scheer arguing against same-sex marriage in Parliament in 2005. Coupled with his earlier support from social conservatives, these events and comments led some to suggest that he might reopen debates about same-sex marriage and abortion. However, Scheer declared that he would not revisit the law if elected.

During the 2019 election campaign, it came to light that Scheer had previously lied about his work experience; he claimed to have worked as an insurance broker, when in fact he worked as a clerk for a brokerage company and was not licensed as a broker. It was also reported that Scheer holds dual citizenship with Canada and the United States — a result of his father being from the US. Critics accused Scheer of hiding this fact, especially after he had voiced concerns about Michaëlle Jean being named governor general in 2005 because she held dual citizenship with Canada and France. (Jean renounced the latter before being sworn in.) Scheer told the media, “I've never tried to hide that. I've never been asked about it by Canadians.” Scheer said during the campaign that he was in the process of renouncing his American citizenship. However, following his election loss, he announced that he would be retaining his US citizenship since he would not be serving as prime minister.

Under Andrew Scheer’s leadership, the Conservatives won 121 seats in the federal election held on 21 October 2019. The party increased its presence in the House of Commons and won the popular vote, receiving over 34 per cent compared to the Liberals at 33 per cent. However, the Liberals won 157 seats, enough to give them a minority government. While the Conservatives made significant gains in Saskatchewan, Alberta and Manitoba, they failed to convince enough voters in the rest of the country. Scheer retained his seat in Regina-Qu’Appelle and his position as leader of the Opposition.

Immediately following the election, Scheer faced criticism from within his party for failing to unseat Prime Minister Justin Trudeau. Many saw the Liberal leader as extremely vulnerable following the SNC-Lavalin affair. This was compounded by revelations during the campaign that Trudeau had worn blackface on more than one occasion Peter MacKay said that Scheer’s election loss was “like having a breakaway on an open net and missing the net.” Calls for Scheer’s resignation intensified. On 12 December 2019, he announced that he would step down. He remained as leader until Erin O’Toole was elected during the Conservative Party’s online leadership convention on 23 August 2020. 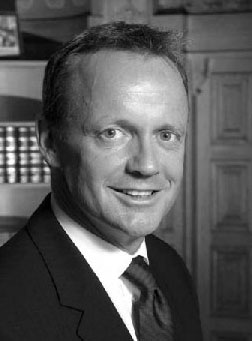