The leader of the Opposition was first recognized by statute in 1905 and given the same salary and allowances as Cabinet ministers. To become the leader of the Opposition, a person must hold a seat in the House of Commons (see Member of Parliament). If the party leader, usually elected at a national leadership convention, does not have a seat, the party house leader temporarily substitutes for the leader.

The leader of the Opposition is a parliamentarian hoping to become prime minster and is the leading critic of government programs and policies. He or she directs the party in Parliament and appoints leading members of the caucus as "shadow ministers" to monitor the work of the ministries. He or she is usually consulted by the prime minister on the appointment of the Speaker and sometimes on the appointment of the governor general.

Stornoway is the official residence of the federal leader of the Opposition. 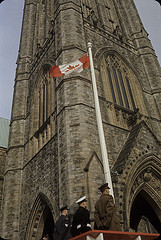