This article was originally published in Maclean’s magazine on March 6, 1995. Partner content is not updated. 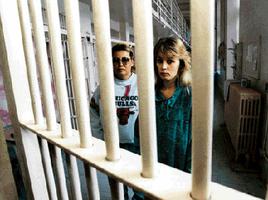 Joey Twins (left) and Ellen Young were two of the prisoners involved in the violent altercation with guards 22 April 1994 (courtesy Maclean's).

Brenda Ann Morrison could hear them coming. And when the six men dressed in body armor, helmets and carrying clubs arrived at her prison cell, they ignored her screams. Morrison, 32, who is serving a five-year sentence for armed robbery at the Prison For Women in Kingston, Ont., was one of eight women who had participated in a riot in April, 1994. They started fires, took a guard hostage and stabbed another with a syringe. Prison officials, worried that the unrest would spread, called in an all-male riot squad who proceeded to shackle the women and helped strip them as part of a search for hidden weapons. "It was barbaric," said Morrison. Last week, in a scathing report, a federal ombudsman investigating the issue said the riot squad had used excessive and dehumanizing force. And after viewing a videotape of the incident, Solicitor General Herb Gray ordered an independent investigation. Said Gray: "I'm very troubled and concerned."

Shortly after the disturbance, Corrections Canada officials launched their own investigation into the incident. That report, made public last month, concluded that Mary Cassidy, who was warden of the maximum-security prison during the unrest, was justified in calling in the riot squad. The report, however, makes no mention of the fact that male members of the riot team actually cut away some of the female prisoners' clothes. And in his report, Ron Stewart, the federal ombudsman who investigates complaints made by the inmates of federal prisons, said the Corrections Canada report was "incomplete, inconclusive and self-serving." He noted that the squad was called in only because the female guards had been demoralized by the prison unrest. To save her credibility with the guards, he added, the warden then called in the emergency response team. Gray stopped short of calling the Corrections Canada report a coverup. But, he noted, "there is a direct conflict between the two reports."

Stewart also said that the eight prisoners deserve financial compensation for the emotional trauma they suffered. While that may happen, the eight women are also in the process of suing Corrections Canada. Morrison's lawyer, Don Bailey of Kingston, said his client is seeking damages for a long list of grievances, including assault and battery and unwanted touching. In the meantime, Corrections Canada has announced that male emergency-response teams will no longer be allowed to strip female prisoners. Instead, they will shackle the women, and female staff will remove the prisoners' clothing. As well, a female riot squad will also be created. Robert Bater, chairman of the prison's citizens advisory committee, welcomed that decision. Said Bater: "At least something positive will come out of this."

The women involved in the riot were among the most violent of the 134 inmates at the prison. For one, Sandy Paquachon, 35, who was serving eight years for armed robbery, also received a life term for murdering a fellow inmate. Another prisoner, Joey Lynn Twins, 37, was also doing a life sentence for murder. And during a robbery, Morrison had repeatedly stabbed a man, threatened to cut off his penis and beat him with a baseball bat. According to a Corrections Canada spokesman, they were among the prisoners who had caused the outburst of violence that lasted for four days beginning on April, 22, 1994. The eight women, some of whom are native and claim that the disturbance followed a racist comment by a guard, made clubs with the metal brackets from the bed frames in their cells. They also tossed burning debris from their cells and threw cups of urine on the guards who approached to douse the flames. The unrest peaked on April 26 when a female guard was trapped by inmates on a catwalk. A male guard finally rescued her, and the riot squad from nearby Kingston Penitentiary was then called in.

In the video, aired nationally last week on the CBC current affairs program the 5th estate, the riot squad appeared to do their job methodically. The video, shot by a member of the team, shows each prisoner being asked to remove her clothes. If she refused, she was forced to the floor and, as she was being held, a female member of the prison staff cut away the inmate's clothes. In one instance, however, a male member of the team is seen cutting the blouse and brassiere off an inmate. In some cases, the prisoners were left naked for long periods before female guards finally gave them paper nightgowns to wear. But despite the raw images, John Edwards, commissioner of the correctional service, defended the squad's actions as necessary "to prevent injuries to staff as well as other inmates."

Stewart, however, questioned whether the riot squad was even needed. In his report, he said that when the squad arrived, the prisoners were all locked in their cells. Many appeared to be sleeping and none resisted. And Bater said males should never have been used to help strip the women in the first place. Most of the female prisoners, he added, had been sexually abused in the past, and being forced to kneel naked surrounded by men was unacceptable. Said Bater: "This only reinforces a behavior they already know so well."

Prison guards say they will be vindicated by the independent inquiry. Said Sheila O'Neil, president of the union representing the corrections officers at the prison: "The emergency team did its job very professionally." Still, Morrison plans to continue her fight. Added Morrison: "We just want the truth to come out." Solicitor General Gray is hoping that is exactly what an independent inquiry will deliver.